Israel and UAE to normalise ties in 'historic' US-brokered deal 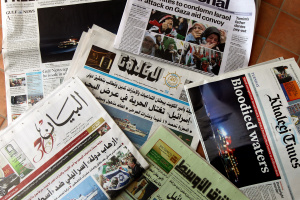 (AFP) - Israel and the UAE agreed Thursday to normalise ties in a landmark US-brokered deal, only the third such accord the Jewish state has struck with an Arab nation, in which it pledged to suspend annexation of Palestinian lands.

The bombshell news was broken by US President Donald Trump, in a tweet hailing a "HUGE breakthrough" and a "Historic Peace Agreement between our two GREAT friends".

He said leaders from both nations would sign the deal at the White House in roughly three weeks, evoking memories of previous Middle East peace signings in Washington.

Establishing diplomatic ties between Israel and Washington's Middle East allies, including the oil-rich Gulf monarchies, has been central to Trump's regional strategy to contain Iran, also an arch-foe of Israel.

Israeli Prime Minister Benjamin Netanyahu said it was a "historic day" and would launch a "new era" for the Arab world and Israel.

The Palestinians strongly rejected the deal, calling it a "betrayal" of their cause, including their claim to Jerusalem as the capital of their future state.

They also announced they were withdrawing their ambassador from the Emirates, and demanded an emergency Arab League meeting.

Palestinian Islamist group Hamas, which runs the coastal Gaza Strip, quickly said the agreement "does not serve the Palestinian cause".

A joint statement by Trump, Netanyahu and UAE's leader Sheikh Mohamed bin Zayed Al-Nahyan announced that they had "agreed to the full normalisation of relations between Israel and the United Arab Emirates".

It added that Israel would "suspend declaring sovereignty" over occupied Palestinian West Bank areas -- an idea proposed in Trump's controversial earlier plan to resolve the conflict.

Sheikh Mohamed quickly stressed in a tweet that "during a call with President Trump and Prime Minister Netanyahu, an agreement was reached to stop further Israeli annexation of Palestinian territories".

But Netanyahu said shortly afterwards in a television address that he had only agreed to delay, not cancel, the annexations, that the plans remained "on the table" and that he would "never give up our rights to our land".

The Palestinians rejected it outright as biased and untenable, as did Israel's Arab neighbours, and it sparked fears of further escalation in a tense region.

United Nations Secretary-General Antonio Guterres said on Thursday he hoped the deal could help realize a two-state solution with the Palestinians for peace in the Middle East.

Annexation would "effectively close the door" on negotiations between Israeli and Palestinian leaders and "destroy the prospect" of a viable Palestinian state, he said.

Israel has had difficult relations and several wars with its Muslim and Arab neighbours since its founding in 1948, with most states ruling out relations until the Israeli-Palestinian dispute is resolved.

Thursday's deal would make the UAE only the third Arab country to establish formal diplomatic ties with Israel, after its peace deals with former enemies Egypt and Jordan.

President Abdel Fattah al-Sisi of Egypt, which signed a treaty with Israel in 1979 to opposition from across the Arab world, praised the deal on "the halt of Israel's annexation of Palestinian land," and said he hoped it would bring "peace".

The deal marks a major foreign policy achievement for Trump as he heads into a difficult campaign for re-election in November.

His presumptive Democratic challenger for the presidency Joe Biden welcomed the "historic" agreement and called the UAE's move a "badly-needed act of statesmanship".

Trump hinted to reporters that more diplomatic breakthroughs between Israel and Arab countries in the region were expected, but gave no further details.

Richard Haass, president of the Council on Foreign Relations, told AFP the deal was "a milestone in Arab acceptance of Israel in the region".

It was also be "a brake on annexation, which would jeopardise Israel's peace with Jordan and Israel's own future as a Jewish, democratic state", he said.

Israeli and UAE delegations will meet in the coming weeks to discuss investment, tourism, direct flights, security and the establishment of embassies, they said.

The trio were confident of further similar deals with other countries, their statement added.

Hours after the deal was announced, the Emirati flag was projected onto Tel Aviv's town hall.

Aaron David Miller, a veteran US negotiator on the Middle East peace process and analyst at the Carnegie Endowment for International Peace, called the deal a "win for all".

"(The) UAE says it's prevented annexation; US prevents annexation too and gets big breakthrough and Netanyahu gets enormous win and off hook from the annexation trap," he tweeted.