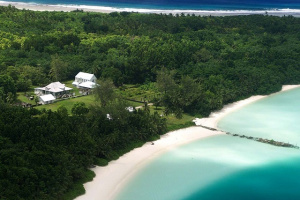 Aerial photograph of the coconut plantation at East Point, Diego Garcia where the largest civilian settlement was in the archipelago. (Wikipedia) Photo License: CC0

(Seychelles News Agency) - The displaced people of the Chagos Islands – who now live in Seychelles and Mauritius - are facing another setback in their fight to return to their islands after the United Kingdom Court of Appeal rejected their appeal for resettlement.

The Chairperson of the Seychelles' based Chagossians – Pierre Prosper – told SNA that the group is already working to contest this decision, adding that the latest setback will not deter their determination to get the British government to right a wrong they inflicted on the islanders 50 years ago.

"We knew the judgment was always 50-50. We still feel that our arguments are still strong and fair and an equitable resolution is not done yet. We feel that the British government and the court have to come up with a resolution that we find it fair to what has happened," explained Prosper.

The case against the UK was lodged by Olivier Bancoult, president of the Chagos Refugees Group in Mauritius, and Solange Houareau, representative of the Chagossian community in Seychelles. Prosper added that the group and its legal team are already working on an appeal and that the Chagossians have trust in their legal team – Leigh Day firm.

"We have a very good, strong, and capable legal team. But being in the British jurisdiction we knew we would have difficulties. As soon as we got the result, we started procedures to go to the Supreme Court and we will go all the way up to the European Commission for Human Rights, all the way up there," said Prosper.

Around 2,000 Chagossians were forcibly evicted from the Chagos archipelago in the central Indian Ocean in 1960 after the UK leased the main island, Diego Garcia, to the United States to use as a military base.

More than 200 were deported to Mahé, the main island of Seychelles - 115 islands in the western Indian Ocean - between 1967 and 1973 when the country was still a British colony.

The islanders enjoyed a small victory – though on paper only – in May 2019. In an overwhelming vote in favour of the rights Chagossians, the United Nations General Assembly voted 116-6 to condemn Britain's occupation of the Chagos islands, a stinging diplomatic defeat for the U.K.

The vote was in support of a motion setting a six-month deadline for Britain to withdraw from the Chagos island chain and for the islands to be reunified with neighbouring Mauritius, according to the Guardian newspaper. However, British diplomats said the non-binding resolution would have a little practical impact.