Itching to travel? 5 airlines that will fly you to the Seychelles islands amid COVID-19 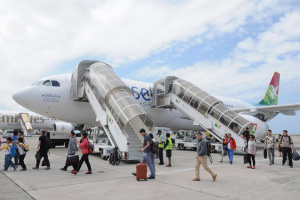 (Seychelles News Agency) - Seychelles’ international airport reopened for commercial flights on Aug. 1, the first regular flights since the country closed its borders in March to mitigate the spread of COVID-19 in the 115-island nation.

The opening of the airport means that the country is re-launching its tourism industry and boosting the economy. Five airlines have confirmed that they will restart flights to the islands as of August.

SNA brings you the five airlines and their schedule.

Abu Dhabi-based Etihad Airways started operations in the island nation after it bought a 40 percent share in the national airline – Air Seychelles – in 2012.

Etihad Airways will now be doing two flights per week to the islands  -- on Mondays and Fridays.

With its motto Bringing Africa Together, Ethiopian Airline started to fly to Seychelles in 2013 with flights up to five times per week. Ethiopian Airlines will now make three flights a week on Tuesdays, Fridays and Sundays.

The Dubai-based airline started flying to Seychelles in 2005. Up to March when Seychelles closed its borders Emirates Airline was flying to the island nation twice a day every day.

Emirates has resumed flights and will be operating five flights per week to the islands.

Air Austral is expected back in Seychelles in September and will operate two flights, on Friday and Sundays.

In September 2018, Swiss airline Edelweiss Air began operating weekly flights to Seychelles. Edelweiss will be resuming its flights to the island nation as of next month; its schedule is yet to be released.