Port expansion project in Seychelles to be tendered; drop in value of rupee problematic 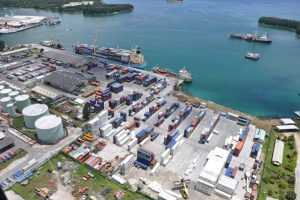 Thereafter, the project will be implemented in phases beginning in the south and then followed by construction in the northern part of Mahe Quay.

Port Victoria, which is currently 370 metres long, will be extended by an additional 230 metres to accommodate two boats measuring up to 250 metres in length at the same time. After the extension, it will have an overall length of 600m.

Once the project is completed, it is expected that the gearless cargo vessels shall call to Port Victoria and the recommended equipment for unloading and loading containers will be mobile harbour cranes. However, this will be entirely dependent on the new terminal operator.

The Seychelles Port Authority said it expects the recent drop in the value of the rupee against the main foreign currencies to impact the cost of the project.

The Authority's chief executive, Ronny Brutus, said although the financial agreements provide for certain adjustments, the COVID-19 pandemic will affect the total cost of the port expansion.

The project involves upgrading and rehabilitating the port which has over the years become deteriorated and congested and in some areas dangerous for continued operations.

The port of Victoria of Seychelles, an archipelago in the western Indian Ocean, is the only port of the island nation that handles the import and export of goods for the country.