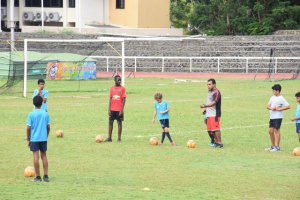 (Seychelles News Agency) - A registered sports association in Seychelles is making use of a pro soccer data application to track athletic progress and stay in touch with its partners.

The chairperson of Futuro Sports Sesel, Lucas Panayi, told SNA that the association is using the app to first and foremost track the progress of its participants.

Futuro Sports Sesel, which was co-founded by former professional Belgian football coach Steve Herbots and Panayi, offers a football training structure for girls and boys from the ages of 4 to 23.

Since its establishment, Futuro Sports Sesel has had a football training school in the central district of Roche Caiman. Parents who want to register their child can do so via email futurosesel@gmail.com  or call 2591018. The cost of registration is SCR400.

Panayi said that the association has set up a comprehensive statistics database with the results of tests done by players in six different objective tests and their results are grouped according to performance, not age.

"We have over 5,500 stats recorded of 312 players and this allows us to see trends in the different age groups and what we have to focus on," he told SNA.

The app being used by Futuro Sports Sesel is one that the Belgian Football Association has been working with since 2014. Through the app, Futuro also has a centralised system which allows more effective administration and direct communication with parents among others.

The association will be introducing an elite structure and after tests have been conducted in the central located schools, the best 100 on the data base will need to come for a trial during the August school holidays. The selected 16 players will get a chance to train with the association once a day as from September 2. This is opened for children aged 10 to 11 years.

Aside from Futuro Sports Sesel there are two other private organisations offering football training for young children – the All Star Youth Academy and the Pro Youth Academy.

The Seychelles Football Federation has the mandate of overseeing football development in the country under the guidelines of the FIFA according to the technical director, Ulric Mathiot.

Mathiot said that an initial meeting has taken place between a representative of Futuro and the football federation in Seychelles, an archipelago in the western Indian Ocean.