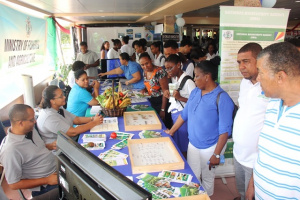 Job recruitment fairs are some of the activities organised for newly graduated students who were job hunting. (Seychelles Nation)

(Seychelles News Agency) - The unemployment rate in Seychelles jumped to 4.8 percent in the first quarter of 2020, a sharp rise from the last quarter of 2019 when it was 2.3 percent, said a government official.

The principal statistician at the National Bureau of Statistics, Maria Payet, told a press conference on Thursday that the rise was "largely" due to newly graduated students who were job hunting.

The quarterly figures are based on data collected in a national survey carried out every year using a sample of 1200 households. However, due to the COVID-19 pandemic and the restriction of movement period, the Bureau of Statistics (NBS) could not collect data for three months. Consequently, the first quarter labour market indicators were carried out with a smaller sample of 800 households.

NBS defines persons in unemployment as those of working age who are not in employment but are seeking work in the four weeks preceding the enquiry and currently available to start working.

According to the survey, there is a significant increase in the rate of unemployment among the youth.

As a strategy to place the youth in or back in employment, an unemployment relief scheme resumed in 2017. From January to July this year, around 4,403 were placed in employment under the scheme.

The survey also looked at youth not in employment, education or training and Payet said that it is standing at a very high rate of 29.2 percent.

"This indicates the extent of untapped potential among the youth population who could contribute to the national development of our country. It is very important to us as these are youth within the age group of 15-24, who are being left idle," she said.

The chief policy analyst of the employment department, Susan Morel, said a "large proportion of these youth are those who have just finished schools such as post-secondary and university and are waiting to join employment."

The survey showed the disparity between unemployed males and females. The figure is higher -- 5.3 percent -- among the male population compared to 4.4 among the female population.

Payet said an interesting outcome of the survey is that more and more people are joining trade unions in Seychelles, an archipelago in the western Indian Ocean.

"This is interesting for us as it shows that people are starting to believe that trade union is a way good way for workers to voice out their concerns," she said.

With regards to the informal sector, Payet said that there has been no significant increase in people migrating to that sector but that "it is important for us to continuously monitor this indicator as our figure for the first quarter of 2020 stands at 17.3 percent, which is still quite significant. The Ministry is working on policies for those in this sector."

The informal sector is an enterprise or establishment that is not legally registered with the Seychelles Revenue Commission or has obtained a license from the Seychelles Licensing Authority.