400 people -- Seychellois and foreigners -- have lost jobs in tourism downturn 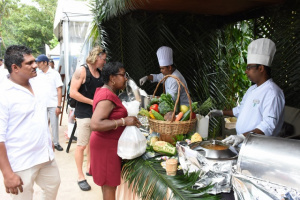 Hospitality businesses, as well as tourism-related support services, have been severely affected and some have already folded. (Seychelles Nation)

(Seychelles News Agency) - Nearly 230 Seychellois and more than 170 foreigners in the tourism sector in Seychelles have lost their jobs due to the economic downturn as a result of the COVID-19 pandemic, said a top government official.

Things could still get considerably worse. In the Department of Employment's forecast, around 4,000 workers might eventually lose their jobs due to the economic impact of COVID-19.

Data from the employment department show that from March 1 to July 3, 100 businesses have applied for permission under the Employment Act to make redundancies.

The employment minister, Miriam Telemaque, told SNA that out of the 100 applications, 33 have been processed and approved leading to 171 expatriates and around 228 Seychellois losing their employment.

Most of the expatriates have already left the Seychelles, an archipelago in the western Indian Ocean, or are waiting for the lifting of travel restrictions in their country of origin to do so.

With the current economic crisis, the focus is on giving Seychellois a better opportunity to remain in employment although Telemaque said further redundancies will affect both Seychellois and expatriates.

The tourism sector, the top contributor to the island nation's economy, has been the hardest hit as visitor arrivals to the country dropped to almost zero over the past three months. Hospitality businesses, as well as tourism-related support services, have been severely affected and some have already folded. While the redundancy applications have come from across all sectors, tourism related businesses make up the bulk.

To cushion some of the financial impacts on employment, the government set up a Financial Assistance for Job Retention scheme to guarantee salary payments for employees and self-employed individuals, for both local and expatriates, from April to end of June 2020.

However, in a review in May, the finance minister Maurice Loustau-Lalanne had announced that "as from July 1, the payment of salaries will be only to Seychellois workers and not expatriates."

The government has set up a company tasked with re-skilling, training and placing Seychellois who lose their jobs in other sectors where there is a need for workers. These workers will receive a monthly allowance from the government which will be the same amount as their basic salary prior to being made redundant.