Football in Seychelles to resume June 24, with or without spectators 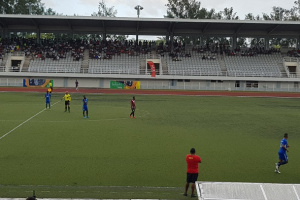 It is not clear if matches will be played with or without spectators. (Seychelles News Agency)

(Seychelles News Agency) - Football competitions in Seychelles are expected to resume on June 24 while preparations are already being made to ensure that all guidelines of the Department of Health are respected, said a top official from the Federation.

It's not yet clear if the matches will have spectators.

The Secretary General of the Seychelles Football Federation, George Bibi, told SNA on Thursday that as from June 24, the focus will be on finishing both the league and the federation cup competitions.

Bibi said that after meeting with representatives of local clubs via Zoom, an online platform for audio and video conferencing, teams can resume training for the competitions from the beginning of June.

In the last press conference on Tuesday, the Public Health Commissioner, Jude Gedeon, expressed concerns that the public is not adhering to social distancing guidelines which is one of the pillars to prevent the spread of COVID-19.

"If we don't achieve the target of good social distancing in the population, if we get other cases, we will have to go back to where we were before. Start closing schools, start more severe restriction which will bring back social distancing by force," said Gedeon.

According to the last public health regulation orders on Sunday May 4, the restriction will be lifted on sports events without spectators as from June 1.

Bibi said the Federation has discussed with clubs on the possibility that matches will be played without spectators.

"There have been different opinions on it but we believe that at Stad Linite which can hold up to 12,000 people, social distancing can be practised. But for the time being, we are waiting for the latest guidance from the Department of Health on whether matches will be played with or without spectators," said the Secretary General.

He added that the National Sports Council is responsible for the sanitization of the venue including the changing rooms but the Federation "will look at placing hand sanitisers in the changing room and if possible get the necessary equipment to take the temperatures of players when they arrive."

Currently, the Football Federation is working on fixtures for the league competition which includes three divisions namely the premier league, championship 1 and championship 2 with teams from the three most populated islands -- Mahe, Praslin and La Digue. The Federation cup is at the 8th final and teams who qualify will proceed to the quarter-final.

Bibi said planning the match schedule will take more time as the transportation for teams travelling from and to the three islands is uncertain as Air Seychelles has cut back on the number of flights per day, same as the inter-island ferry – Cat Cocos.

This he said might impact on when the competition will finish but provisionally it is expected to be the end of August, three months later than planned due to the COVID-19 pandemic.