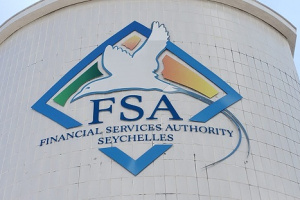 FSA has also called on stakeholders to consolidate this achievement and support the industry which has proved that it is a key contributor towards the country's economy. (Rassin Vannier, Seychelles News Agency)

(Seychelles News Agency) - The Financial Services Authority of Seychelles is paying a dividend of SCR25 million ($1.4 million) to the government for the first quarter of 2020, a significant increase to its SCR7 million ($400,000) for the same period last year, said a top official.

The authority's chief executive, Steve Fanny, made the announcement at a joint press conference on Friday with the Seychelles International Financial Services Association (SIFSA), at the authority's headquarters on Bois De Rose on the outskirts of the capital Victoria.

Fanny described it as a huge achievement at a time when the country is in dire need of foreign exchange since tourism, the main economic activity, is at a standstill with the closure of Seychelles' borders.

"We have been working hard during this difficult time and we now have hard currency in foreign exchange to pay the government, which in return can be used to buy essential goods for the country," said Fanny.

He added that on top of the dividend, the sector has paid an additional SCR4 million ($228,000) in taxes to the government during the period January to March 2020.

Fanny attributed this good performance to the fact that the International Business Companies registered in Seychelles have opted to renew their licenses at the beginning of the year.

"The fact that they renewed their registrations so early in the year indicates that they still have confidence in Seychelles as an offshore jurisdiction. And I can confirm that we have 60,000 companies which are in good standing that in itself is very impressive for a small jurisdiction like ours," he said.

Fanny said the substantial amount also has to do with the fact that there are no capital projects planned for this year, compared to last year, where FSA undertook the refurbishment of its warehouses.

FSA has also called on stakeholders to consolidate this achievement and support the industry which has proved that it is a key contributor towards the country's economy.

"We always talk about the financial sector as risky. Covid-19 has proven that tourism comes with a lot of risks and the fisheries industry faces the risk of over-exploitation among others. The question should not be about the risks but how do we as a country manage, mitigate, and minimise the risks," said Fanny.

With the tourism sector at a standstill, Seychelles, an archipelago in the western Indian Ocean, has to consider diversifying its economy and look at other activities that could generate foreign exchange.

Meanwhile, the FSA has said that it is going to review its strategy this year to tap into new markets and enhance its current products which include IBCs, trust and foundations.

Fanny said at present the FSA is doing well in terms of renewal, with around 60 percent annually, but is trailing by 40 to 50 percent in terms of new registration of new companies,

He also said there was a need for the local sector to remain ahead of the curve internationally to prevent the negative publicity that tarnished the financial sector's reputation last year and earlier this year.

France placed the island nation on the blacklist of tax havens last December for not having been cooperative enough on issues of fiscal transparency relating to requests for information on some French offshore entities registered in the island nation.

Seychelles was also included on the United States' sanctions list due to links with Iran.

"If we don't stay ahead of the curve we will always play catching to these international regulators. Financial service is a full-time job and we need to have intelligence and engage with all levels so that we can foresee what is happening in the sector and prepare our legislation accordingly," said Fanny.