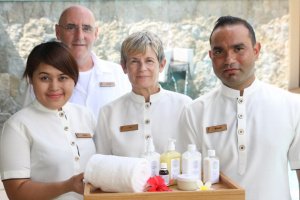 Around 9,000 foreigners work in the tourism sector and half of them have applied for the financial assistance for the three-month period. (Joe Laurence, Seychelles News Agency)

(Seychelles News Agency) - Seychelles' government will not cover the salaries of foreign workers after July 1, a top government official said.

Foreigners working for businesses whose economic activities have been affected by the COVID-19 pandemic are receiving financial assistance under the Financial Assistance for Job Retention scheme set up by the government.

Under the scheme, the government has budgeted SCR1.2 billion ($66 million) to cover salaries in the private sector and non-governmental organisations between April and June.

The announcement to cancel the payment at the end of June was made during a joint press conference at the International Conference Centre on Friday, by the ministries responsible for employment and tourism.

"In its weekly Cabinet meeting on Wednesday, the government took a decision not to pay the salaries of foreign workers in the private sector and this will come into force on July 1," said the Minister of Employment, Immigration and Civil Status, Myriam Telemaque.

There are around 20,000 expatriate workers in Seychelles, a group of 115 islands in the western Indian Ocean, and according to the employment department, there are 5,000 presently overseas.

Around 9,000 work in the tourism sector and half of them have applied for the financial assistance for the three-month period.

"I am calling on private businesses especially those in the tourism sector which unfortunately are being affected due to COVID-19, to relook at their workforce. Since we do have locals who can take up these jobs, maybe they should re-evaluate their workforce and start offering these positions to locals," added Telemaque.

The statement was welcomed by the tourism department which said this was an opportune time to look at the tourism workforce especially the young graduates.

The Principal Secretary for tourism, Anne Lafortune, said the department was working with the Seychelles Tourism Academy to ensure more locals remain in the industry.

"We know that some students drop out throughout the year or leave the industry as soon as they start employment. We are therefore working on a strategy to ensure students complete their courses and are employed in the industry later so that we don't have to depend on a large foreign workforce," she said.

However, Telemaque said the employment department will still approve some posts requiring specific skills not available on the local market, "but a thorough review will have to be done before any approval is given."

Meanwhile, the Employment Department said it is proposing amendments to the Employment Act to allow employers to negotiate the lay-off of workers since their businesses are not in operation or to implement redundancy plan.

At the start of the pandemic, the government had initially said it will not approve lay-offs and redundancies.

The principal secretary for employment, Jules Baker, said the decision was taken following discussions with the private sector and if approved by the National Assembly, will relieve the pressure on businesses whose cashflow have been affected and must still cater for other expenses.

"As you are all aware a lot has changed since the announcement. Our borders are closed and tourism is at a standstill. The situation remains fluid and dynamic and the government has to adjust and amend its decisions based on what is happening on the ground," said Baker.

The amendments will be applicable to both locals and foreigners.

The department says if approved, the law will be effective until the end of June, but with the possibility of renewal based on the situation on the ground.

"This decision will also allow the business to repatriate the foreign workers to their home countries, thus reducing additional costs such as accommodation on their businesses", added Baker.

Meanwhile, the department has also reiterated the government's position not to issue new Gainful Occupation Permit for expatriate workers and said those whose permit has expired and are presently overseas will not be allowed back into Seychelles.