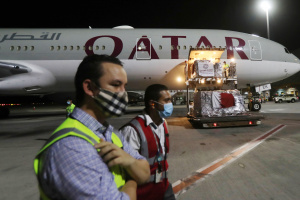 Supplies to tackle the coronavirus COVID-19 pandemic donated by the Qatar Fund for Development are loaded onto a Qatar Airways flight to Kigali in Rwanda at Doha's Hamad International Airport, on April 28, 2020. (KARIM JAAFAR / AFP)

(AFP) - Qatar Airways has warned its employees of "substantial" redundancies amid a collapse in demand for air travel caused by the coronavirus, according to an internal memo seen by AFP Tuesday.

The Gulf airline, which flew to more than 170 destinations with 234 aircraft as of March, has been hit by airport closures and travel bans imposed to contain the spread of COVID-19.

The International Air Transport Association warned last month that air traffic in the Middle East and North Africa would plummet by more than half this year.

"The truth is, we simply cannot sustain the current staff numbers and will need to make a substantial number of jobs redundant -- inclusive of cabin crew," Qatar Airways chief executive Abkar al-Baker wrote in a memo to cabin crew dated Monday.

The note did not specify how many of its more than 30,000 staff were at risk of redundancy, although the airline has had to slash its passenger services to just 35 destinations.

"The unparallelled impact on our industry has caused significant challenges for all airlines and we must act decisively to protect the future of our business," the airline said in a statement.

"As a result, Qatar Airways can confirm that the airline will make a number of roles redundant due to the impact of COVID-19. Any job loss is regrettable and we will be working closely with all affected employees to offer our full support during this difficult time."