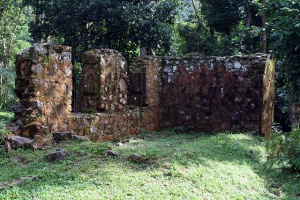 On March 20, 1876, Venn’s Town, the first educational institution for the children of liberated slaves, was officially opened in Seychelles. Located up the hills at Sans Soucis in the north-west of the main island of Mahe, it was established by the Christian Missionary Society and named after Henry Venn - an Anglican evangelist.  The institution closed in 1889.

This week, SNA brings you 4 interesting facts about Venn’s Town, also known as the Mission, and considered as the foundation of formal education in Seychelles.

The spectacular views of the islands

Located southwest of the Morne Seychellois national park, the Mission Ruins of Venn’s Town is a place of unique historical, cultural, aesthetic and ecological value. The area offers breathtaking views of the inner islands and the bay, which can be seen at a popular viewing lodge. The lodge which was opened on March 20, 1972, when Queen Elizabeth II visited the site, 96 years after it was opened.

A settlement for liberated slaves

When opened in 1875, Venn’s Town was also a settlement with plantations of vanilla and patchouli amongst others. The settlement comprised of buildings used for learning, as well as a laundry and dormitory. The ruins and foundations of these buildings still stand today. A cemetery was also part of the compound.

Special consideration as a UNESCO’s site

The justification being used for this consideration is that the place has outstanding universal value lies in what it represents for the Seychellois nation. The setting up of Venn's Town was seen as the beginning of a new era in the life of people who have been captured and oppressed. The large numbers of freed Africans had a great impact on Seychelles in the formation of the Creole Seychellois identity and it gave birth to subsequent civilisation.

If endorsed Venn’s Town will become the archipelago’s third UNESCO’s site. Seychelles, a group of 115 islands in the western Indian Ocean, has two World Heritage sites already: the Aldabra Atoll – the natural habitat of the endemic giant land tortoises and the Vallee de Mai nature reserve on Praslin, where the endemic coco de mer grows in its natural state.