A writer's lucky trip to India's Taj Mahal, place of beauty and wonder 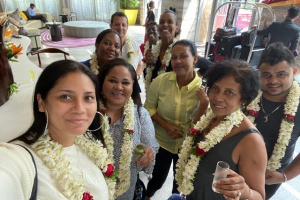 The team of journalists and editors from Seychelles. (Laura Pillay)

(Seychelles News Agency) - It goes without saying that if you have visited the Taj Mahal in India, considered as one of the wonders of the world, you could consider yourself very lucky.

This is how I felt when I joined a group of 19 journalists and editors from Mauritius and Seychelles on a familiarisation visit to India February 23-29.

The journey started in Bengaluru also known as Bangalore, the capital of India's southern Karnataka state.

The first place we visited was the Indian Institute of Management Bangalore. Founded in 1973, the Institute offers a range of academic programmes such as post-graduate, doctoral and executive training.

We then travelled to Infosys -- an Indian multinational corporation -- that provides business, consulting, information and technology and outsourcing services. We visited inside the corporation, a space bigger than the Seychelles' capital city, Victoria.

Another journalist on the visit, Rita Gay told SNA that this was her second visit to India, and the level of development from the last visit was simply mind-blowing.

"I must say that the seven-day visit also shows that if India can change so much in a mere two-year period, the plans and goals it has in store for the coming year are bound to be achieved," said Gay.

I couldn't agree more with Gay. Infosys resembles a village away from India, which occupies the best technology focusing on renewable energy and sustainability.

Our visit next brought us to Delhi, a city that never sleeps, and we landed at the airport, expecting bumper-to-bumper traffic but instead saw a clean and beautiful place. Flowers, a growing green environment and majestic buildings along the street underlined India's rapid transformation over the years.

We were housed at ITC Maurya hotel situated in the diplomatic area of New Delhi, a place favoured by heads of states, royalties and business leaders from across the world.

Our journey to discover Delhi began the next day with a visit to the Indian Institute of Mass Communication. We were given a small history of the institution and the different courses that it is offering, which include a four-month course attaining a diploma in journalism development.

Our last visit was to Taj Mahal in the Indian city of Agra. It is a place seen by many on pictures and postcards visited by many.

Our journey started at 4:30 am on a four-hour bus drive.  We were all in awe by the beauty and history that keep the place alive. The mausoleum was commissioned in 1632 by the Mughal emperor Shah Jahan who reigned from 1628 to 1658, to house the tomb of his favourite wife, Mumtaz Mahal.  The mausoleum is also the tomb of Shah Jahan.

The Taj Mahal is a 17-hectare mausoleum which includes a mosque made out of precious stones from different parts of the world.

Laura Pillay, who was part of the delegation, said: "This place is the most beautiful and awe-inspiring wonder I have ever set my eyes on and the four-hour drive to the site was completely worth it."

"Not only is it an aesthetic marvel but the story behind the world wonder only serves to add to its astounding beauty. Although it was crowded the experience was thoroughly enjoyable and one which I will cherish for years to come," added Pillay.

Another aspect I enjoyed with the visit is the rich culture and food. I had no problem adapting and enjoying the food as it more or less the same as in Seychelles, an archipelago in the western Indian Ocean.

Despite the great experience, I'm aware that India, like other countries, has its downside.  Through my visits, I could see that air and noise pollution remain a problem, especially for someone like me who comes from an island acclaimed for its fresh air.

Then there is the issue of poverty. I saw people who still don't have access to decent accommodation and those living on the streets. There were also young children begging on the street.

We learned through various presentations made by representatives from Invest in India, that there is an active collaboration between the private sector and the government to annihilate poverty in all aspects.