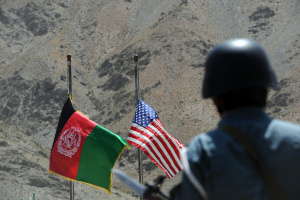 FILES) In this file photo taken on July 24, 2011 Afghan and US flags are raised as a policeman keeps watch during a ceremony to hand over security control in the rugged mountains of the Panjshir valley. International war crimes judges ruled on March 5, 2020 that a probe into wartime abuses in Afghanistan must go ahead, including looking into possible atrocities committed by US forces, as they overturned a previous court ruling.(SHAH MARAI / AFP)

(AFP) - International war crimes judges ruled on Thursday that a probe into wartime abuses in Afghanistan must go ahead, including looking into possible atrocities committed by US forces, as they overturned a previous court ruling.

The call was hailed by human rights organisations as a "pivotal moment" for victims of the central Asian country's 18-year-war since the 2001 US invasion.

The court's chief prosecutor Fatou Bensouda also praised the ruling, saying "today is an important day for the cause of justice in Afghanistan."

But US Secretary of State Mike Pompeo attacked the International Criminal Court's decision as a "reckless" move and "a truly breathtaking action by an unaccountable political institution masquerading as a legal body".

Pompeo told a news conference in Washington that it was "all the more reckless for this ruling to come just days after the United States signed a historic peace deal on Afghanistan, which is the best chance for peace and a generation."

Pre-trial judges at the ICC -- an independent court set up in 2002 to try the world's worst crimes -- last year rejected a demand by its chief prosecutor to open a full-blown probe into crimes committed in the war-torn nation.

Prosecutors at The Hague appealed the move, saying that the judges made an error when they slapped down Bensouda's request by saying although it met all the right criteria and a reasonable basis, it was "not in the interest of justice".

The appeals judges agreed with the prosecution.

"The prosecutor is authorised to commence an investigation into alleged crimes committed on the territory of Afghanistan since May 1, 2003," ICC judge Piotr Hofmanski said.

"It is for the prosecutor to determine whether there is a reasonable basis to initiate an investigation."

Pre-trial judges are only called upon to see if there is a reasonable basis for an investigation and not to "review the prosecutor's analysis", he said.

In fact, the appeals judges said, prosecutors could even look into possible atrocities outside of Afghanistan if they were clearly linked to its armed conflict.

ICC prosecutors previously said their investigation would include alleged war crimes by US Central Intelligence Agency operatives at detention facilities, referred to as "black sites" in ICC member countries like Lithuania, Poland and Romania.

At least 24 suspects were subjected to torture at these secret prisons between 2003-2004, the prosecutors said.

In 2006, the ICC's prosecutors opened a preliminary probe into possible war crimes and crimes against humanity in the central Asian nation since 2003.

In 2017 Bensouda asked judges to allow a full-blown inquiry, not only into Taliban and Afghan government personnel but also international forces, US troops and CIA members.

But pre-trial judges then said it "would not serve the interests of justice" and that the court should focus on cases with a better chance of success.

Bensouda's move had unleashed a backlash from Washington, which in April last year revoked the Gambian-born chief prosecutor's visa as part of broader restrictions on ICC staff probing American or allied personnel.

Former national security advisor John Bolton warned in 2018 that the US would arrest ICC judges if the court pursued an Afghan probe.

The US has never joined the ICC and does not recognise its authority over American citizens, saying it poses a threat to national sovereignty.

Washington argues that it has its own procedures in place to deal with US troops who engage in misconduct.

Afghanistan also opposes the inquiry, saying the country itself had "responsibility to bring justice for our nation and for our people".

The ICC's ruling comes days after Taliban militants killed at least 20 Afghan soldiers and policemen in a string of overnight attacks, throwing the country's nascent peace process into grave doubt.

Under the terms of a recent US-Taliban agreement, foreign forces will quit Afghanistan within 14 months, subject to Taliban security guarantees and a pledge by the insurgents to hold talks with Kabul.

A US-led force invaded Afghanistan in 2001 following the 9/11 terror attacks in the US, targeting Al-Qaeda in the sanctuaries provided by the Taliban government.

Fighting has continued ever since -- last year more than 3,400 civilians were killed and almost 7,000 injured, according to data provided by UN agencies.