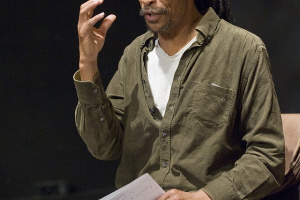 The Seychellois moved to Oslo, Norway in 1979 after completing his studies in acting and directing in Dorset, England.  (Cliff Moustache)

(Seychelles News Agency) - A Seychellois and now naturalised Norwegian citizen has been recognised by the Mayor of Oslo for his contributions in the arts sector.

Cliff Moustache is the first foreigner to be given the prestigious Artist of the Year award by the Mayor of Oslo - Marianne Borgen - for his extensive contributions towards society, theatre and the entertainment landscape in Norway.

Moustache, an award-winning director and filmmaker, has for the past 35 years been establishing himself as a director, playwright, writer, actor and filmmaker in Europe. Moustache recently visited his country of birth to establish contacts for his latest project, a fictional documentary-series on the history and heritage of Seychelles.

"I have been listening to the Truth, Reconciliation and National Unity Commission (TRNUC) and I picked one story that I would like to develop and build a documentary on. I think it is important; I went to the history museum and I was inspired as I didn't know much about my history. I realised that history and heritage are so important to share so that the future generations can know about their history," said Moustache.

The artist who over the years has produced many documentaries and short movies want to work on a fictional series on the history of Seychelles - 115 islands in the western Indian Ocean.

Moustache also wants to collaborate with the Seychelles Broadcasting Corporation (SBC) for a production that has the Creole touch while still appealing to an international audience.

The Seychellois moved to Oslo, Norway in 1979 after completing his studies in acting and directing in Dorset, England. There he worked with the state media briefly before starting to write his own productions and went on to open his own theatre company, Nordic Black Theatre, in 1992. The self-funded theatre produces its own productions, participates in collaborative projects with other artists, and develops young multicultural actors through the theatre school Nordic Black Xpress (NBX), which he also opened in 1993.

"Opportunities were quite limited for foreigners at the time. I was determined to make the most of the limited choices available to me and I was driven to establish something in the country, where it all began," said Moustache.

Since his first short movie, Radio Knockout, 20 years ago, Moustache has produced several others and won several awards in Scotland, England, Portugal and North America. Taking a brief break from movie production Moustache has been actively involved with directing and realising theatre shows in and around Europe.

'After the Dream,' a play about American civil rights activist Martin Luther King, is Moustache's latest production was staged at the Oslo Opera House in March. King was a Christian minister who became the most visible spokesperson and leader in the Civil Rights Movement from 1955 until his assassination in 1968.

A second play based on the life of another American, Nina Simone, is expected to be staged in Sheffield, England in August. Simone was a singer, songwriter, and civil rights activist who passed away in 2003.

Moustache is a strong believer of giving back to the community in the hope of inspiring a future generation of artists and creative industry. As a result, he has partnered with educational and training centres in Vietnam and with the University of Miami and give lectures.