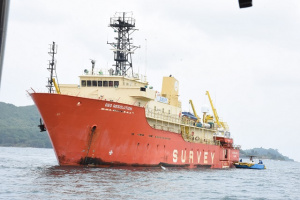 The ship owned by marine company EGS Survey, based in the United Kingdom, conducted surveys up to a depth of 5,000 metres for the new Pakistan East Africa Cable Express (PEACE) system. The survey started from Mombasa Kenya down to the landing point at Perseverance beach -- on the northeast side of the main island of Mahe.

The Seychelles Cable Systems (SCS) -- the local company undertaking the project -- said an integral part of the project implementation is the marine survey to establish the exact route that the cable will take to its landing point.

Representatives of the local company and journalists on Monday had the chance to tour the ship, stationed just off the coast of Perseverance beach, as it undertook inshore survey works.

According to Benjamin Choppy, it was also a chance to meet, interact with the crew and learn more about the works being done and difficulties encountered.

"The company has vast experience working with the PEACE system which has its origin in Asia. The ship has the knowledge and has surveyed the whole system, and not only in Seychelles but from the Red Sea, Pakistan down to Kenya. Our contract with the company is for surveying to here," explained Choppy.

A representative from Seychelles Cable Systems joined the crew of Geo Resolution in Kenya and has had the chance to oversee the work to the island nation. The survey took three weeks.

"Our representative has ensured that all went well and briefing received is that they are satisfied with the work and that there were no serious problems with the route to Seychelles," added Choppy.

In September 2018, the local company signed a contract with Huawei Marine Networks (HMN) for the construction of a branch on the PEACE system to connect the Seychelles from Kenya.

The PEACE project is being implemented at a cost of $20 million and will act as a backup in connecting Seychelles – 115 islands in the western Indian Ocean – with the rest of the world through faster and more reliable internet.

This submarine cable is the second fibre optic cable, after the first one – the Seychelles East Africa System connected from Dar Es Salaam, Tanzania - landed 10 years ago.

In a public consultative two weeks ago, residents of Perseverance were given an overview of the project. They also learned why the area was chosen for the landing.

"We are awaiting the formal results of the survey because what we have now are the raw data with preliminary analysis. We wait for the final results, and we have not seen any major issues in this survey," concluded Choppy.