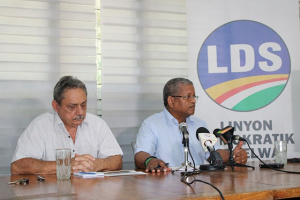 (Seychelles News Agency) - The presidential candidate of the Linyon Demokratik Seselwa (LDS) party, Wavel Ramkalawan, said that a search carried out on one of his bags at the Seychelles International Airport by the Anti-Narcotics Bureau (ANB) was premeditated, malicious and intended to smear his image.

Ramkalawan told a news conference on Wednesday that "for the 25 years that I have been in politics and serving as a member of the Assembly I have never encountered such a situation. My issue comes whenever the law is not being observed. What happened to me on Saturday, I would say that the law was not being followed."

A search was done by an officer of the Anti-Narcotics Bureau on Ramkalawan, the Leader of the Opposition in the Seychelles' National Assembly, upon his return from an official trip in South Africa. His diplomatic passport was also taken temporarily for verification.

Ramkalawan said he felt his rights were violated by the fact that he was not told why he was being stopped to be searched.

"I believe in the rule of law and it remains one of my core principle under which I operate. I am saying this because it can be interpreted that I am just complaining for the sake of it. I want to make it clear that I don't have any problems with the police searching my luggage, but as long as they do their job right," he said.

Ramkalawan lodged a complaint the same day which has been confirmed by the Anti-Narcotics Bureau in a communique onTuesday.

There are usually three main authorities present at the airport for incoming passengers: the health authority, immigration and customs.

"If a person comes in with an illegal thing or object in his luggage, you would expect custom to deal with that person. Yet again if that person is detected with drugs, customs would call in an ANB officer to conduct a search and do the necessary procedures," said Ramkalawan.

He said on that day when the search was conducted there were other officials from the Seychelles National Assembly whom he had travelled with from South Africa. He said that as for them they were not searched.

He added that he finds the whole scenario to be clearly premeditated as after the incident his driver told him that he got a tip off that the ANB were planning to search him upon his arrival to the international airport of Seychelles, an archipelago in the western Indian Ocean.

Responding to critics on social media that he acted arrogantly and instigated the officer to search on him, Ramkalawan showed the press a camera footage of what has happened while rejecting those claims.

The leader of LDS, Roger Mancienne, said that their political party protests in the strongest possible terms to ensure that the authority of the ANB as a branch of the police force is not used for any improper action, especially anything that suggests political motivation.

"It has to be noted that attempts have in the past been made to smear election candidates, including with the accusation of involvement with drugs," said Mancienne in a press statement.

He added that the ANB has a crucial task in the effort against drug trafficking and its authority to conduct searches is not in question, but such actions must in every instance be based on legitimate grounds otherwise they defeat the very purpose they are intended to serve.