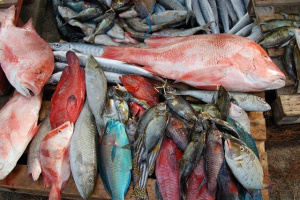 Artisanal fishermen have noticed that there is a decrease in the abundance and size of fish in their usual fishing areas, attributed to both climate change and overfishing. (Gerard Larose, Seychelles Tourism Board)

As a small island nation, Seychelles is economically and environmentally vulnerable to the effects of climate change. Changes in precipitation, sea level and temperature rise are affecting the 115-island archipelago of the western Indian Ocean.
SNA is taking a look at the effects that climate change has on the island nation. This week SNA looks at how climate change affects the fisheries industry, which is the nation’s second-largest contributor to the economy after tourism.
In an interview with Jean-Claude Labrosse, the principal climate adaptation officer, at Seychelles’ environment ministry, it was outlined that rising sea surface temperature has a negative effect on coral reefs, which in turn affects fish stocks.
“One of the things that affect this industry is coral bleaching. Based on sea temperature that is rising, coral is dying which in turn means that fish move away as they use coral as their habitats and food sources. If coral dies, the fish stock will drop as fishermen continue to catch them,” said Labrosse.
According to the Coastal Oceans Research and Development – Indian Ocean (CORDIO), “at the beginning of January (2020), temperatures across the entire Western Indian Ocean are one to two degrees warmer than usual for the same time period.
The seasonal outlook predicts moderate to high bleaching across the region. The Indian Ocean is the warmest of all the oceans.
Coral bleaching occurs when vibrantly coloured algae that live symbiotically/interdependently on coral structures flee as a result of environmental stress such as warming water.
Without the algae, coral loses its main food source and become more brittle as well as more susceptible to disease.
During the ocean warming event of 1998, it is estimated that the Seychelles – 115 islands in the western Indian Ocean - lost up to 90 percent of its coral reefs.
A paper from the Food and Agriculture Organisation stated that “the anomalously high sea temperatures coincided with anomalously low primary production in the western Indian Ocean and a major shift in tuna stocks.”
Artisanal fishermen in Seychelles have noticed that there is a decrease in the abundance and size of fish in their usual fishing areas, a decrease that is attributed to both climate change and overfishing.
A group of fishermen from the second-largest island of Praslin has come together to implement a voluntary fisheries closure which they hope will help the stock to recover. The project is mainly targeting artisanal fishermen who make a living off species living on the reef.
"We as fishermen have noticed that the size of fish is decreasing and so is the amount. We have taken examples of similar projects that have been carried out in other places and have had interesting results,” said Darrel Green, the chairperson of the Praslin Fishers Association.
In a fight to mitigate the effects on the coral reefs, which are being damaged not only but climate change but also by human activities, some organisations and establishments have come up with initiatives to restore corals.
The Nature Seychelles restoration project is using more than 50,000 coral fragments, grown in underwater nurseries for more than a year, off Praslin Island, to increase the coral population.
The Four Seasons Resorts coral restoration project looks at restoring 10,000 square metres of coral reef in Petite Anse bay, where the resort is located.
Labrosse also outlined that mangroves found along the coast of Seychelles have an important role to play in maintaining fish stock.
“One of the main roles of mangroves is to provide habitat for juvenile fish. Fish lay their eggs and once they hatch, they come into the shelter of mangroves, where they grow. When our mangroves are affected, a drop in fish stock is expected,” explained Labrosse.
Mangroves defend against the impacts of rising seas and coastal erosion by drastically reducing the height and force of the waves before they hit the shoreline.
And a study carried out by Emily Pidgeon shows that coastal wetlands “absorb carbon at rates up to 50 times greater than terrestrial forests.”