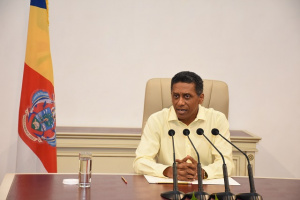 Seychelles' president said that the presence of the experts in Seychelles will help the government better understand the work being done and "I think that in the following four to six months we will be able to solve the problems that exist between the local Ministry of Finance, our offshore sector and the department that oversees finance in France."

Seychelles was blacklisted last year after the island nation did not provide adequate information about some French offshore entities operating in its jurisdiction.

Faure said that a national committee has been established to look at relevant laws as well as the relationship Seychelles has with the European Union and the OECD -- the Organisation for Economic Co-operation and Development.

On the agreement and protocol between Seychelles and the European Union, which expired on January 16 and is expected to be signed by mid-February, Faure said that "we need to respect the protocol that the union has in place."

"They have quite a complex administrative structure, and an agreement that is discussed needs to be circulated within all the member countries to end with one final document. We need to respect the protocols but in principle, we have come to an agreement and once it is signed, things will be implemented," said Faure.

"I am satisfied with this round of negotiation where we made sure to focus on the interest of Seychelles. That is the reason why it went into a fourth round," he added.

President Faure said that during his visit to Bahrain earlier this year, discussions were held with the leader of the country to seek funding for a coastal management project.

"As you know the World Bank has helped Seychelles to put in place a plan. For us to implement this plan, the country needs $15 million. It was an opportune time to explain to the people in Bahrain the problems that we are facing on our outer islands as well as Mahe, Praslin and La Digue," he said.

He added that through the help of Bahrain, the Seychelles Coast Guard will receive two seacraft that will increase the number of assets required to deal with drug trafficking in the waters of Seychelles. Discussions also touched the financing of housing projects.

Following amendments made in the Seychelles Pension Fund law, allowing the Ministry of Finance to have an oversight on investments being made, the fund has finalised its deal with Cable and Wireless Seychelles.

"There are about 330,000 shares that have been obtained by the pension fund (amounting to $24 million), which equals to a 22 percent share in Cable and Wireless Seychelles. Through the previous transaction, Seychelles Pension Fund would have acquired about 20 percent for $24 million," explained Faure.

Answering a question about the outstanding $16.5 million payment from Liberty Global, Faure said that as of December 31 last year, $14 million that has been credited into the state's coffer.

"The remaining balance was settled through the exchange of properties. The property at Le Chantier has been returned to the government and so has a large property at Bon Espoir," said Faure.

Keep yourself updated about the novel coronavirus situation

The president said that all the concerned authorities are doing their best to stay on top of the situation and there is a need to keep talking about it.

"I am asking all Seychellois to closely follow the announcements being made by our experts through the news on the radio and television," said Faure.

Recommendations from the Truth, Reconciliation and National Unity Commission

According to the law that governs the commission, recommendations are expected to be handed to the president every six months on actions to be taken by the government to unify the country.

"I recognise that through the commission, we need to find the problems. I am waiting for the recommendations that will be forwarded to me by the commission," said Faure.