President of Seychelles launches election bid, saying he will 'build and preserve future' 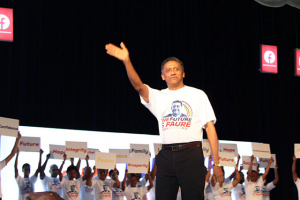 Faure said a lot has been achieved during his three-year tenure and he remains committed to bringing Seychelles to greater heights. (Rassin Vannier)

During the two-hour ceremony, Faure's campaign slogan 'The Future is Faure – 2020 & beyond' was also unveiled. Faure is the candidate for the United Seychelles (US) party.

Faure, who was endorsed at the party's 33rd Congress last August, told the over 600 supporters present that Seychelles' future was assured and strong with him as president.

"Leave it in my hands because I Danny Faure I am a man of the future. My vision is the future, my mission is to build and preserve Seychelles future and that of every Seychellois," he said.

The presidential election will be held in the last part of 2020; no date has yet been set.

The 57-year-old who is a presidential candidate for the first time said a lot has been achieved during his three-year tenure and he remains committed to bringing Seychelles to greater heights.

Among the issues the party will continue to address are housing and drugs, youth development while at the same time focusing on better living conditions for the elderly. Faure said he will be announcing his list of priorities in the coming months.

Faure said Seychelles needs a leader that was calm "and today more than ever we need a leader who can sit around a table to talk to others without attacking them."

He added that as a leader he recognises the challenges and past mistakes, and that the country should learn from these mistakes to move forward.

"The ship called Seychelles, needs a good captain, a captain who does not only talk and criticise the bad weather but who prepares to face the stormy weather," he said.

Faure did not announce his running mate for the post of vice president.

The National Executive committee of United Seychelles is expected to set a date for the designated candidate to choose his running mate.

The outgoing vice president, who is also the party's Secretary General, Vincent Meriton, said that United Seychelles has the best candidate for the upcoming presidential elections.

"I am a hundred percent convinced that in the upcoming election, US has the best candidate and we need to work hard and take that message to the people," he said.

Meriton called on US supporters to remain focused and not to be distracted by rumours.

"Let's not react to futile comments. Seychelles' future is more important than everything else and the upcoming election is the most important of all," concluded Meriton.

United Seychelles, previously Parti Lepep, has won all presidential elections since the return of multiparty democracy in 1993.