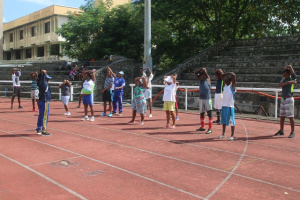 The athletes in a training session on Tuesday at the Stade Popiler. (Joe Laurence, Seychelles News Agency)

The national director of Special Olympics Seychelles, Helene Ernesta, who will also head the delegation, told SNA on Saturday that although the invitation came late, a team of 20 athletes are ready for the Games.

"Our athletes practice every Sunday so it was not a problem to put a team together. We have 20 athletes and this includes eight players for the five-a-side football competition, eight athletes for the track and field athletics competition and four for the bocce competition," said Ernesta.

The mission of the Pan African Games is to provide a high-quality sports experience and engage key influencers and communities to help create positive attitudes and bring about permanent change towards the inclusion of people with intellectual disabilities throughout the continent of Africa.

The Games will include a series of sports and non-sports events in which around 800 athletes from 42 countries will compete. The sports events are athletics, football, basketball and bocce – a ball game related to British bowling or French petanque.  The games will have other range of activities such as healthy athletes medical screenings and a regional youth leadership summit.

Although team Seychelles is ready, Ernesta is appealing to anyone who can assist in any way to get in touch with the Special Olympics Seychelles.

The team leaves on Thursday via Dubai onwards to Cairo.

"Like I always say, our athletes have always performed well and we expect them to give their very best but even if they don't win any medals Special Olympics is all about participation," said Ernesta.