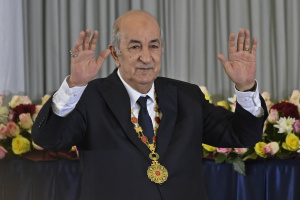 Algerian President Abdelmadjid Tebboune waves during the formal swearing-in ceremony in the capital Algiers on December 19, 2019. The 74-year-old Tebboune, a former prime minister seen as close to the country's powerful military chief, reportedly garnered 58.13 percent of votes in the first ballot of a highly contested presidential election, according to the announced final results. He said after his victory he was ready for dialogue with a months-long protest movement that toppled his predecessor Abdelaziz Bouteflika.(RYAD KRAMDI / AFP)

He succeeds veteran leader Abdelaziz Bouteflika, who was forced out in April in the face of huge demonstrations after two decades in office.

Tebboune must now address the grievances of the protesters, who have remained on the streets to prevent what they see as a ploy by the political elite to retain its hold on power.

The 74-year-old is seen as close to the armed forces chief, Lieutenant General Ahmed Gaid Salah, who has been the North African country's de facto strongman since Bouteflika quit.

He and other top brass attended the swearing-in ceremony alongside Tebboune's defeated rivals for the presidency.

All five candidates in the election had links to Bouteflika, who had clung to power despite suffering a debilitating stroke in 2013.

While Tebboune's period as prime minister ended with his sacking by Bouteflika, protesters see the longtime regime insider as part of the same corrupt system that has ruled Algeria since independence in 1962 -- a system they want dismantled.

Following his election, Tebboune invited the Hirak protest movement to engage in dialogue as well as vowing to appoint young ministers and push for a new constitution -- comments rejected by the protest movement.

But on Thursday he repeated those pledges.

"I renew my engagement to reach out to everyone," he said during a speech at the swearing-in ceremony.

The new constitution will reduce the powers of the president and "guarantee the separation and balance of powers", he added.

Although Tebboune took 58 percent of the vote in last week's election, avoiding the need for a second-round run-off, the widespread boycott meant he won the support of barely 20 percent of registered voters.

By convention, the new president would normally be expected to announce his first major decision, his choice of prime minister, later on Thursday.

In a sign that he has not yet made his selection, he named Foreign Minister Sabri Boukadoum as interim premier after outgoing prime minister Noureddine Bedoui, named in March by Bouteflika, tendered his resignation.

Whomever Tebboune picks will be carefully scrutinised by the protest movement to assess how serious he is about addressing its grievances.

The president has already said the new government will include some ministers in their 20s, a major change for a country where most are in their 60s or older.

More than 53 percent of Algerians are under the age of 30 and unemployed graduates and school-leavers have been a mainstay of the protest movement.

The young demonstrators accuse the political elite of economic incompetence and of handing out public sector jobs to their cronies not those best qualified.

After nearly a year of political turmoil, there are some Algerians, particularly small businessmen, who yearn for a return to stability and whose support for the protest movement has waned.

But the country's grinding political crisis may be exacerbated by its economic situation.

Algeria is heavily dependent on oil exports and its budget has been hard hit by low crude prices, which could force Tebboune to take unpopular decisions.