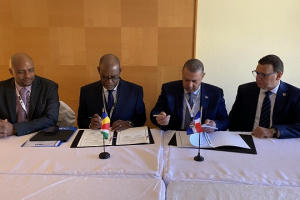 The signing was done during the twelfth edition Air Services Negotiation Conference. The annual meeting was hosted by the International Civil Aviation Organisation and was held in Jordan early this month. ( SCAA)

Seychelles has expanded its air transport portfolio with the signing of two new air services agreements with Zimbabwe and the Dominican Republic.

The signing was done during the twelfth edition Air Services Negotiation Conference (ICAN). The annual meeting was hosted by the International Civil Aviation Organisation (ICAO) and was held in Jordan early this month.

“Zimbabwe and the Dominican Republic are two countries with whom we enjoy excellent bilateral ties and we believe that the signature would elevate our relationship with these two countries to new heights,” said Ambassador Jean - Claude Adrienn, who is based in the United Arab Emirates.

The ambassador added that such agreements translate into tangible gains for Seychelles, which relies heavily on tourism and trade as drivers of economic development.

“The signature of these agreements attest to Seychelles’ commitment to increase the number of regulatory frameworks that would allow the country to boost connectivity with the rest of the world,” said Adrienne.

Seychelles’ four-member delegation at the meeting was led by the chief executive of the Seychelles Civil Aviation Authority (SCAA), Garry Albert.

The delegation met and negotiated five potential new agreements with Cyprus, Paraguay, Senegal, Belarus, and Guyana. These air transport agreements have been initialed and await signatures.

The event, which is the largest Air Services negotiation platform, saw the participation of 61 states and seven international organisations.

It was officially opened by the Minister of Transport of Jordan Khalid Walid Saif, representing the Prime Minister of Jordan, Omar Al-Razzaz.

Addressing the meeting, Saif emphasized that this platform is unique in both shape and form, in that it sheds light on the many challenges and opportunities in the conduct of Air Transport regulated by bilateral Air Services Agreement.

Following the annual meeting, Seychelles – 115 islands in the western Indian Ocean - now has a total of 91 Air Services frameworks.