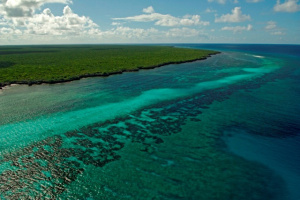 Aldabra was awarded the Platinum Level Blue Park status which is the highest level of the award. (Seychelles Islands Foundation)

(Seychelles News Agency) - Seychelles’ remote Aldabra Atoll has been recognised as an outstanding marine protected area with a Blue Park designation by the Marine Conservation Institute.

Aldabra was awarded the Platinum Level Blue Park status which is the highest level of the award; only 10 sites in the world have this designation.

According to the Seychelles Islands Foundation (SIF) newsletter, the Aldabra special reserve received the recognition in October.

The chief executive of the foundation, Frauke Fleischer-Dogley, said, “We are thrilled to receive this prestigious award for the unique and spectacular treasure that is Aldabra Atoll.”

She added that “my personal mission over the last 20 years has been to ensure that nature conservation and protected area management is firmly based on science. This award recognizes these efforts and shows the world that science-based management is possible in a region which has very limited resources for science and research.”

The Marine Conservation Institute launched Blue Parks to protect 30 percent of the ocean by 2030. The Blue Parks initiative is an innovative strategy to incentivise decision-makers to establish protected areas that safeguard marine life and promote opportunities for sustainable tourism.

Senior Scientist of Marine Conservation Institute, Sarah Hameed, said, “Blue Parks like the Aldabra Atoll Special Reserve are the antidotes to the barrage of threats to life in our oceans. We may not be able to stop climate change impacts immediately, but we can create or maintain strong protected areas in the right places today which will enable ecosystems to build or maintain resilience for the future. That’s the objective of each Blue Park.”

Aldabra - one of the world’s largest atolls - is a UNESCO World Heritage Site in Seychelles, a group of 115 islands in the western Indian Ocean. It is home to a population of endemic giant Aldabra tortoises which fluctuates to around 100,000, more than the 95,000 population of Seychelles.

The atoll is 34 km long and 13 km wide with a large and shallow lagoon covering an area of 196 square kilometres larger than the island of Mahe.

Hameed added that many of today’s marine protected areas do not offer effective protection and do not protect the best places.

“They’re often ‘paper parks’ appearing to meet national commitments but lacking substance. But Aldabra Atoll Special Reserve meets science-based standards we know will protect the oceans for generations to come. If we elevate and bring recognition to Blue Parks like Aldabra, we believe it will encourage more countries and leaders to satisfy this critical standard going forward,” she said.

This is Aldabra’s fifth international designation, which demonstrates the rigorous and effective management in place at this spectacular protected area.