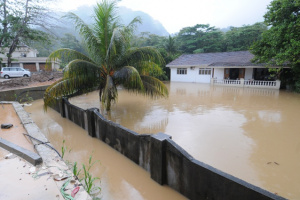 Flooding in the northern region at the Beau Vallon area in 2014 where the Savoy Resort is today. (Joena Meme, Seychelles Nation)

(Seychelles News Agency) - High tides of up to 1.9 metres are expected as of Friday evening, and the Seychelles Meteorological Authority is asking people to take precautions along the northern, north-western and western coastal areas of Mahe, the main island.

As Seychelles goes through the full moon phase, high tides of 1.8 metres or 1.9 metres leading to December 16 are expected, Gerard Bijoux, the senior forecasting officer at the Seychelles Meteorological Authority told the press on Friday.

“Once we get the new moon, towards December 24 to December 27, we will also be getting the 1.9-metre-high tides,” he said.

“People should definitely start taking precautions, especially drivers who are taking the coastal roads. We know that these high tides happen early morning at around 6 a.m. when people are heading to work. This is when they will see a lot of water on the road and we are asking them to take extra precaution,” explained Bijoux.

Seychelles, an archipelago in the western Indian Ocean, experiences high tides of 1.5 to 1.6 metres during times when there is no full moon.

He added that it is particularly important to clear outlets -- where the rivers and marshes meet the sea, because if there are heavy rainfalls, floods might occur in areas where outlets are blocked.

The senior climate adaptation officer, Anie Simeon, said that the climate change division at the Ministry of Environment is making sure that these outlets are being cleared on a regular basis to prevent flooding.

Residents living on the coasts of Mahe, especially in the north, are being asked to remain calm and liaise with the climate change office should any incidents happen or need advice on what to do.

“There are many people whose properties are located along the coast who panic during this period. They see sand being eroded from the beach and they want to protect their properties; they want something to be done immediately,” explained Simeon.

She is calling on concerned citizens “to wait a little” and not to try to find solutions to the problems on their own.

Bijoux said that there has been an improvement in the weather following the phenomenon where cyclones were forming a little close and the island nation was being affected by strong winds and heavy rainfalls.

He added that Seychelles is in the rainy season and “as of Monday, the country is expecting some rain, which might be heavy at times.”

From November to March, Seychelles has its rainy season in the northwest monsoon, while from May to September, when the southeast trade winds prevail, there is a dry and slightly cooler season. April and October are known as the transitional months.

Bijoux said that more extreme weather could be coming. Seychelles "might even experience continuous rain that will fall for more than 24 hours. Toward the end of December and in January, we might reach high tides of 2 or 2.1 metres.”