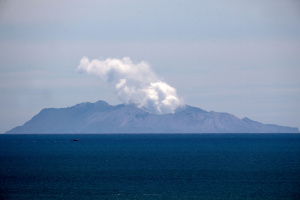 Steam rises from the White Island volcano following the December 9 volcanic eruption, in Whakatane on December 11, 2019. The smouldering New Zealand volcano that killed at least six people is still too dangerous for emergency teams to recover bodies from, police said on December 11, warning that many tourists who escaped the island were so badly burned they were not yet out of danger. (Marty MELVILLE / AFP)

(AFP) - The families and friends of Australian victims of the White Island volcano tragedy paid tribute to "wonderful" lost loved ones Wednesday and expressed doubt they were made aware of the risks of visiting the island.

Seven of the nine people so far identified and named as missing by New Zealand police are from Australia.

An eighth Australian victim who died in hospital was named by authorities there late Wednesday.

That number is expected to rise.

Many more of the victims are expected to have been day-trippers from a cruise ship that left from Sydney.

As the human toll from Monday's eruption came into sharper focus, the families of four of those Australian victims -- who are presumed dead -- spoke out.

"Gavin was a wonderful son and brother," father Brian Dallow told media, saying it would have a "big impact" on the family, especially at Christmastime. "We're really going to miss him."

"He was a generous man, always helping his family and his community."

Gavin Dallow was believed killed along with his 15-year-old stepdaughter Zoe Hosking.

"Our hearts break at the loss of Zoe at such a young age. We know her loss will also devastate her school community and the local Girl Guides of which she was an active member," her step grandfather said.

Her mother, Lisa Hosking, is among those being treated for severe burns.

Brian Dallow said he did not believe his son would have visited the island if he was aware of the risk.

"New Zealand police earlier this morning confirmed that both Julie and Jess are amongst the deceased in this tragic incident in New Zealand," he told reporters in Brisbane.

Mickel described the pair as "adventurous" and lovers of outdoor sports, saying Jessica was a university student and promising Australian Rules player.

"The family, of course, are united in grief."

Six friends who had been travelling with three other Australians who died -- Jason Griffiths, and couple Karla Mathews and Richard Elzer -- released a joint statement via the country's foreign affairs department late Wednesday.

The group said they had spent five "wonderful" days together on a cruise before they were "devastated" by the news the trio had been on the island when it erupted and Mathews and Elzer had not made it off.

"We then located our third friend, Jason Griffiths, in a hospital in the early hours of the next morning," they said.

"From that moment until the moment of his passing, Jason was surrounded by friends and family members.

"We are incredibly saddened to have lost three of our closest friends."

Australian Prime Minister Scott Morrison said his government had "activated a repatriation plan to bring a number of Australians injured in the White Island volcano tragedy from New Zealand to Australia for specialist medical care."

Up to 10 injured patients will be transferred, beginning in the next 24 hours.

"Three Royal Australian Air Force aircraft have been deployed to New Zealand as part of the repatriation effort."