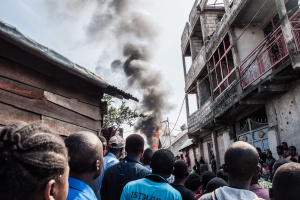 Nearly 70 civilians have been massacred in the Beni region since a military offensive against the ADF began at the start of November. (PAMELA TULIZO / AFP)

(AFP) - Angry residents set fire to the town hall in DR Congo's volatile city of Beni on Monday after eight people were killed in a suspected attack by a notorious militia.

Army spokesman Colonel Mak Hazukai confirmed the latest casualties in the city, near the Ugandan border, telling AFP that "the enemy entered the Boikene quarter and killed eight civilians."

Incensed locals then partly burnt the town hall and then moved towards the camp of the UN peacekeeping mission in the Democratic Republic of Congo (MONUSCO) on the outskirts of Beni, an AFP reporter saw.

There have been a string of rallies against local forces and UN peacekeepers in Beni, accused of failing to stop attacks by the Allied Democratic Forces (ADF) militia.

Nearly 70 civilians have been massacred in the Beni region since a military offensive against the ADF began at the start of November.

A protester died in police firing on Saturday. Two policemen were killed the same day by angry demonstrators, the UN Okapi radio said.

The ADF began as an Islamist rebellion hostile to Ugandan President Yoweri Museveni.

They fell back into eastern DRC in 1995 and have recruited people of different nationalities, but appear to have halted raids inside Uganda.

MONUSCO on Saturday said the Congolese army had launched the offensive unilaterally.

"MONUSCO cannot engage in operations in a war zone without being asked and without strict coordination with the national army," it said in a tweet.

Uncoordinated action could lead to casualties from friendly fire, it added.

Beni, in addition to being in the front line of militia violence, is also the epicentre of an Ebola epidemic that has killed around 2,200 people since August 2018.

On Friday, the World Health Organization (WHO) said fighting in the region meant an opportunity to end the outbreak could be lost.

Also in eastern DR Congo, at least 29 people were killed on Sunday when a small plane crashed after takeoff, smashing into a densely-populated area of the city of Goma.