Last Irish nun in Seychelles dies at age 93; remembered fondly as a teacher 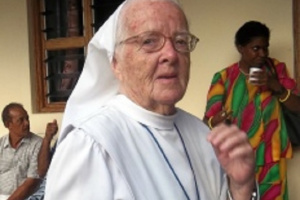 Sister Dominic was the last of the Irish Sisters of St Joseph of Cluny who arrived in Seychelles from October 1950. (Seychelles Nation)

(Seychelles News Agency) - Sister Dominic Kavanagh of the St Joseph Convent, who passed away last week, will be laid to rest on Tuesday afternoon.

The President of Seychelles, Danny Faure, has expressed his sorrow following news of the passing of Sister Dominic Kavanagh at the St Joseph Covent.

Sister Dominic was the last of the Irish Sisters of St Joseph of Cluny who arrived in Seychelles from October 1950.

It was in 1947 that Sister Dominic took her religious vows back home in Ireland after entering the convent in 1944.

She came to Seychelles, a group of 115 islands in the western Indian Ocean, accompanied by Sister Oliver soon after completing her teacher training in Scotland.

Sister Nita Servina of the congregation told SNA that her fondest memories of Sister Dominic are when they used to go for picnics after the annual retreat in August.

“She used to love the sea, was a good swimmer and encouraged me to learn how to swim – at least to float.  I also remember when we had our own congregation choir whenever we have celebrations.  Sister Dominic, together with Sister Oliver used to sing soprano.  It was just beautiful,” said Sister Nita.

Sister Dominic will be remembered in the education sector, and Sister Nita who joined St Joseph Convent in June 1985 said her first encounter with her was as headteacher of Bel Eau School.

She became a headteacher at Bel Eau in 1982 when the Regina Mundi school closed in December 1979. Sister Dominic retired from teaching in 1988.

“She was a person who liked to be up to date with all the happenings both locally and internationally.  She used to read a lot, and listening to the BBC World news was a must every day,” added Sister Nita.

Sister Dominic has been a member of the St Joseph of Cluny for 72 years and been in Vice Province of Seychelles for 69 years.

“Most of the Sisters here have known her for nearly all their lives and it is natural that her passing away will leave a great void in our Congregation, in our Province and in our hearts,” Sister Nita told SNA.

She added that “Our Congregation motto is ‘The Holy Will of God’ so we accept this passing away of Sr. Dominic in faith, know that her suffering is no more and that she is at peace with the Lord.  She has been undaunted in the giving of herself in the mission that was confided to her and for us who are still on this journey she will be “a role model” of a dedicated life.”

Sister Dominic will be fondly remembered by many of her students and teaching colleagues as well as her religious community.