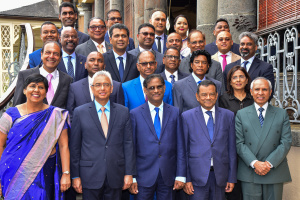 (AFP) - Mauritius's incumbent Prime Minister Pravind Jugnauth was sworn in for a five-year term on Tuesday after elections in which his coalition consolidated its grip on parliament.

Jugnauth, 57, took over from his father in 2017 without going through a vote, and the decisive victory of his centre-right Morisian Alliance in the November 7 elections has strengthened his legitimacy.

He immediately proposed a new cabinet of 23 members which was approved by Vyapoory.

It includes three women, including newcomer Kalpana Koonjoo-Shah who will take over the gender equality ministry.

Jugnauth held the finance portfolio in the previous government, but he is now handing it over to Renganaden Padayach, former deputy governor of the Bank of Mauritius.

The Morisian Alliance claimed 42 of 70 seats in parliament, trouncing the centre-left National Alliance of Navin Ramgoolam, which got 17 seats, and the Mauritian Militant Movement of Paul Berenger, which garnered nine seats.

Since attaining independence from Britain in 1968, Mauritius has become one of the most stable democracies in Africa.

The vote last week was peaceful across the Indian Ocean island nation which has evolved from a poor, agriculture-based economy to a relatively wealthy financial services hub and tourist beacon.

During the campaign, Jugnauth touted his stewardship of the economy, which grew at nearly four percent in 2018, and an infrastructure drive that included construction of an underground train.

But Mauritius, situated roughly 1,800 kilometres (1,100 miles) off the eastern coast of Africa, is not without its problems.

Youth unemployment, at 22 percent, is high and income inequality is seen as deepening in the diverse country of 1.3 million.