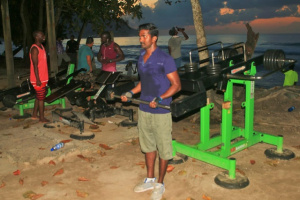 The gym is being used as a way to keep fit and a source of attraction for holidaymakers and locals.

Think that a fitness gym has to be inside a stuffy building? Think again.

The opening of Seychelles' first outdoor gym is encouraging more islanders and visitors to commit to exercise in a green environment with fresh air and the therapeutic sound of waves crashing onto a white sandy beach.

The outdoor gym, located at Beau Vallon beach, on the northern side of the main island Mahe is operated by the National Sports Council (NSC).

With its location at the most popular beach for visitors, the gym is being used as a way to keep fit and a source of attraction for holidaymakers and locals.

Francis Remie, who is the director for sport for the NSC, told SNA on Wednesday that more people, especially the young, are taking up exercising thanks to the new facility.

“Every day there are countless young people exercising and socialising at the place. This is a good thing for our society as it will reduce health issues amongst our youth. There should be more therapeutic facilities such as this one,” added Remie.

The facility is equipped with high standard and durable weights and step-up machines, sponsored by a German family -Maskelov - which owns a company that produces the equipment.

Vadim Maskelov, a representative of the family, said that the facility will prevent people especially kids from doing drugs, and take exercise as an alternative.

Maskelov added that his family has the intention to sponsor another batch of equipment that is going to be located on a beach – yet to be identified - on Praslin, the second-most populated island of the 115 islands archipelago in the western Indian Ocean.

As a great fan of exercise, I took the chance to try the weights and test my fitness. After a few attempts with the weights, I realised that I needed more exercise. There were upsides, though. I was amazed by the quality of the equipment for an outdoor facility. The green colour of the equipment is striking, suggesting an attempt to blend it with the astounding environment of the place.

Stephen Bristol, 21, who uses the facility, said that he comes to the place twice a week and since its introduction, he has stopped going to the gym.

“Who needs indoor exercise when you have the great outdoors?” Bristol said, “I don’t need to travel to the Victoria gym anymore, I can remain in my district for exercise. I feel very healthy and I rarely feel stressed,” said Bristol.

SNA also got the chance to interview an Italian national, Bernado Aimone, 37, who was using the facility to keep up with his exercise routine that he has adopted back in his country.

“This is a great place to do exercise with the natural temperature to heat things up and with the winds to cool down your body after exercising. I am on holiday. I am enjoying and eating a lot of amazing food here. I am very careful about my body and weight, thus, I need to continuously exercise,” said Aimone.

But what are the medical benefits of outdoor exercise?

The doctor of a private clinic, Murthy Pillay, said that the facility is a great initiative as you'll likely get a stronger workout if you take it outside.

“In a study on running indoors versus outdoors, researchers found that outdoor exercisers exert more energy to cover the same amount of distance as treadmill runners, indicating that if the goal is physical fitness, outdoor workouts are the way to go,” said Murthy

He added that “another study published has also found that immersing yourself in nature lowers cortisol, pulse rate, and blood pressure. That's an impressive fix."

A national survey on non-communicable diseases conducted between 2013 and 2014 showed that around three-quarters of Seychelles’ population of 93,000 were overweight and 11 percent were already suffering from diabetes.

The public health commissioner, Jude Gedeon, said that it is no secret that such a facility will increase people’s interest to do exercise. “We constantly need to ensure that we provide the right opportunity and environment for people to engage in outdoor physical activities. This applies to more fitness trails and safe pavement for runners,” said Gedeon.

Gedeon said that outside exercise provides more oxygen for aerobic respiration providing you with the mental boost you need. “Working out outside can help improve your immune function, help you sleep at night, increase endorphin production and exposure to early sunrise which provides vitamin D3,” he said.