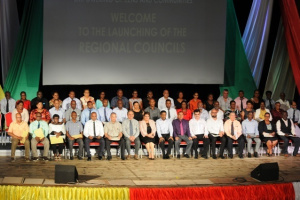 The seven regional councils were launched in July last year as a pilot project for a period of one year. (Thomas Meriton)

Too much politics involved, inefficient, and a waste of taxpayers’ money. Those were the views of some of the participants who took a survey about the effectiveness of regional councils in Seychelles after the completion of a one-year pilot project.

The people running the councils, conversely, saw their work as effective.

“The majority of service users involving the elderly and youth believe that it was a waste of time and taxpayers’ money. They believe that there was too much politics involved,” said Benjamin Vel.

Whereas for the service providers, which included the elected members of the National Assembly, regional councillors, and district administrators, Vel said that “they believed in the work that they were doing and felt that the council was efficient.”

The method used for the survey included two questionnaires, focus group discussions and viewing reports from local newspapers, as well as documents from the local government to establish the council.

The seven regional councils were launched in July last year as a pilot project for a period of one year.  The appointment of the council members was criticised as curtailing democracy in the island nation, with some political parties not happy with being left out of the process.

According to the Local Government department, the establishment of the councils is an initiative to empower the community and involve them in the activities of their districts.

The 49 nominated members were appointed in accordance with an agreed bipartisan agreement between the two main political parties -- Linyon Demokratik Seselwa and the then Parti Lepep, now United Seychelles. Their mandate ended at the end of August of this year.

A top official from the Local Government department, Dan Frichot told SNA that the regional council was a pilot project that needed constant monitoring, and an end of term evaluation was necessary to find the way forward.

“The outcome of the survey is based on public opinion. When it was launched it took some time to inform the public on its aim and role,” Frichot said, adding that “the survey has pointed out that there has been a preference for district councils rather than regional council to be established, but yet again this will depend on the government to determine what is next for local governance in the country.”

The councillors were working on a part-time basis and were remunerated with a monthly allowance.

Alvin Grancourt, the council chair for inner islands, said that “members of the public did not know much about their work because one year was not sufficient to establish themselves and to create a strong awareness among the public.”

Seychelles -- 115 islands in the western Indian Ocean -- is the only country in the region whose councils are nominated and appointed instead of being elected by the people.

The survey recommended that councillors should be remunerated accordingly and should work on a full-time basis. It also recommended that its role and function are clearly communicated to the public to avoid confusion and lack of awareness.

The result of the study will be presented to the cabinet of ministers and a decision will be taken to decide on the future of the regional councils.