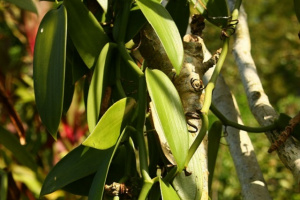 Vanilla is another crop IDC seeks to venture into. (Seychelles News Agency)

Coetivy -- known for its black tiger prawn farm in the 1990s and early 2000 -- has also been earmarked for two major tourism projects once the government transfers the lease of the island to IDC.

Savy said the company had taken a step back from agricultural and livestock production in the past “because we handed over the quotas that we had to the farmers on the main islands.”

“We are aware that there is an increasing demand for local products and we are planning on venturing in the field again,” explained Savy.

The Islands Development Company, which is responsible for the sustainable development of the outer islands, manages 14 islands. The third plan of the company which covers the years 2018 to 2023 was approved by the Cabinet of Ministers in September last year.

Vanilla is another crop the company seeks to venture into -- a product that is estimated to be worth $4,000 to $5,000 per kilo. Having noticed a rise in the consumption of goat meat IDC hopes to rear this animal on a large scale.

The company also has plans to rehabilitate coconut plantations on Farquhar and other outer islands. Coconut collected will be used to produce virgin coconut oil for export, as well as animal feed for chicken raised for consumption on the islands.

“We are aware that there are various producers of coconut oil on Mahe who buy coconuts from us today. Our aim is to make sure that we continue to provide them with coconut so that they can go on with their activity and we will process the surplus,” said Savy.

Providing an update on the construction of infrastructure on Cosmoledo, Savy said that the company will not be able to build a runway on the island as they previously anticipated to do.

“We were going to build an airfield on Cosmoledo but last year when we visited the island during the Southeast monsoon, we realised that the bird population increases significantly during this period,” said Savy.

The chief executive added that the board of IDC are studying alternative forms of transportation to the island other than boat transfers from Astove. Cosmoledo currently provides a fly-fishing experience to tourists.

IDC has completed the planned construction of a runway on Providence and Savy said that “a small team of constructors are still on the island, prepping the place for tourism development and rebuild a village.”

He added that “once we complete the survey, we will submit plans to the planning authority to get the authorisation to go ahead with the tourism development.”