China urges 'restraint' from US, Iran after Saudi oil attack 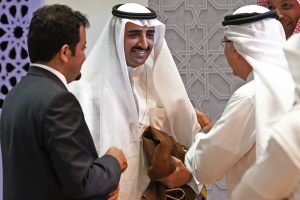 Bahrain's Oil Minister Mohammed bin khalifa bin Ahmed (C) attends the 24th World Energy Congress (WEC) in the Emirati capital Abu Dhabi on September 10, 2019. The OPEC petroleum exporters' cartel and key independent producers are deliberating how to halt a slide in prices that has persisted despite previous cuts and US sanctions that have squeezed supply from Iran and Venezuela. (KARIM SAHIB / AFP)

(AFP) - China on Monday urged the United States and Iran to "exercise restraint" after a drone attack on Saudi oil infrastructure, which Washington has blamed on Tehran.

Chinese foreign ministry spokeswoman Hua Chunying also said it was not responsible to accuse others "in the absence of a conclusive investigation or verdict".

"The Chinese side's position is that we oppose all actions that enlarge or intensify conflict," she told reporters at a regular press briefing in Beijing.

"We hope that both sides can exercise restraint and jointly safeguard the peace and stability of the Middle East," she added.

The drone strikes on Saturday, claimed by Tehran-backed Huthi rebels in Yemen, hit two oil plants in Saudi Arabia and caused a record surge in oil prices, as output from the world's top exporter was slashed in half.

US Secretary of State Mike Pompeo has accused Tehran of launching the attack and said that the US would ensure "Iran is held accountable for its aggression."

On Sunday, President Donald Trump also hinted at a potential American military response to the attack by saying the US was "locked and loaded" to respond.

Iran, however, has dismissed accusations from the US, suggesting that Washington was seeking a pretext to retaliate against the Islamic republic.