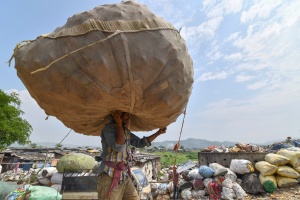 An Indian labourer carries a sack of plastic bottles on his head near one of the largest disposal sites in north-east India, ahead of the 'World Environment Day' in Boragaon area of Guwahati on June 4, 2018. World Environment Day is marked annually on June 5, and aims at promoting awareness and action to protect the environment. (Biju BORO / AFP)

(AFP) - A Sri Lankan investigation into nearly 3,000 tonnes of illegally imported hazardous waste has shown that some of it was sent on to India and Dubai, a top minister said Friday.

Finance Minister Mangala Samaraweera told parliament the importer of the waste had reshipped about 180 tonnes of raw garbage to India and Dubai in 2017 and 2018.

Sri Lanka's customs department found that a local company imported 241 containers from Britain, out of which 15 had been sent to India and two to Dubai.

Sri Lankan customs insist the British authorities should not have allowed the export without first clearing with Sri Lankan authorities if they were willing to accept the untreated waste.

The customs service said the consignment was believed to contain mortuary waste among other garbage which included large quantities of plastic.

"We have ordered the importer and shipping agent to take immediate steps to return the containers to its origin (Britain)," the minister said.

"I have also ordered that all those responsible be prosecuted immediately."

He said 130 containers had been taken to a free-trade zone near Colombo and some had been emptied causing contamination of water sources and air pollution.

"The importer has been asked to immediately repack all the garbage back in the containers," he said adding that all the waste must be sent back to Britain.

The company at the centre of the probe, Ceylon Metal Processing Corporation Privater Limited, said the storage company at a free trade zone was responsible for processing what they imported as "used mattresses".

Ceylon Metal director Sasikumaran Muthuramar denied that the containers, 111 of which are held up at Colombo port, contained bio waste.

Sri Lanka customs authorities said Tuesday that the waste had been mislabelled and imported as used mattresses, but contained bio and clinical waste in contravention of international laws on the transport of waste material.

Sri Lanka's pushback comes as Indonesia and the Philippines also returned shipments of foreign rubbish to their ports of origin.

Indonesia announced two weeks ago it was sending more than 210 tonnes of garbage back to Australia and Canada has agreed to accept 69 containers of rubbish it had shipped to the Philippines between 2013 and 2014.