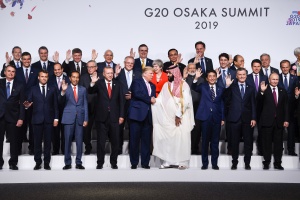 (AFP) - Leaders of the Group of 20 opened a high-stakes summit in Japan's Osaka Friday that is expected to be one of the most fractious in years.

Japan's Prime Minister Shinzo Abe opened the meeting, which will be dominated by contentious discussions on trade, geopolitical tensions, and climate change.

But the mood appeared friendly in the opening minutes, with smiles on the faces of the arriving leaders as they posed for the traditional "family photograph".

US President Donald Trump and China's Xi Jinping, whose countries are mired in a damaging trade war, exchanged a handshake before the photo.

And as the leaders headed into the first session, French President Emmanuel Macron leaned down to whisper something into Trump's ear, covering his mouth for privacy as he did so.

The first session of the meeting is focused on the digital economy, with concerns about privacy and security on the agenda.

"Digitalisation has rapidly changed various aspects of our society and economy," Abe said as he opened the session.

"I'm happy to see the momentum to globally tackle the digital economy."

But in a sign of the ongoing tensions likely to dominate talks, Trump appeared to make reference to US concerns about the security threat posed by Chinese telecoms firm Huawei.

As "we expand digital trade, we must also ensure the resilience and security of our 5G networks", he said.

Trump's administration has taken measures to ban Huawei, with China reportedly seeking an end to the restrictions as part of any resumption of talks on resolving the trade war.

The summit is being overshadowed by the trade war between the world's top two economies, with hopes that Xi and Trump can reach a truce when they hold talks on Saturday on the sidelines of the summit.