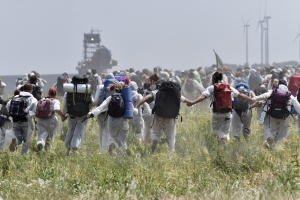 Climate activists enter the grounds of the open-cast mine in Garzweiler, western Germany, on June 22, 2019. Anti-coal activists try to reach and occupy the massive open-cast lignite mine in a protest to demand action against global warming, now one of the hottest issues on the European political agenda. (INA FASSBENDER / AFP)

(AFP) - Saudi Arabia has moved to block mention of the findings of a landmark report on global warming from decisions taken at United Nations' climate talks, delegates and sources close to the negotiations told AFP Monday.

Nations are gathered in the German city of Bonn for their annual discussion on how to proceed under the UN Framework Convention on Climate Change (UNFCCC), with some of the most dire warnings yet of the risks posed by rising temperatures still ringing in delegates' ears.

The Intergovernmental Panel on Climate Change (IPCC), the world's leading authority on the matter, said in October that in order to stay within a safer cap of 1.5C of warming, drastic cuts in fossil fuel use would be needed within just a few years.

The IPCC report built on the 2015 Paris climate deal, which agreed to limit global temperature rises to "well below" 2 degrees Celsius (3.6 Fahrenheit) in order to stave off the worst social, economic and environmental impacts caused by our heating planet.

By signing the Paris agreement, nations pledged to use the "best available" science to inform the timing and extent of future cuts in greenhouse gas emissions.

At the most recent UN climate talks in December, Saudi Arabia joined the United States, Kuwait and Russia in refusing to welcome the findings of the IPCC report.

In Bonn, Saudi Arabia rejected draft phrasing that specifically noted the IPCC's findings over emissions levels, according to documents seen by AFP.

A source close to the talks said the Saudi delegation argued there was insufficient evidence to support the IPCC's assertion that 1.5C of warming was vastly beneficial to 2C, and that it raised doubts over the report's timeframe and scope.

The source told AFP that the US delegation said evidence supporting the 1.5C target was "limited".

The IPCC report was compiled by over 90 of the world's leading climate scientists and drew on more than 6,000 scientific references.

Saudi Arabia is one of the world's largest oil exporters and its economy is heavily reliant on fossil fuels -- which the IPCC said needed to be subjected to swingeing cuts in order to safely stay at 1.5C.

One delegate told AFP that the Saudi delegation had "not allowed us to move forward" in discussions, adding that "other nations" had failed to raise objections to the Saudi position.

The Saudi delegation did not respond to a request for comment from AFP.

Carlos Fuller, head of the Alliance of Small Island States negotiating bloc, said that a suggestion tabled by developing nations that the IPCC report and its impacts on countries be discussed in further sessions could provide a way out of the impasse.

"We are not questioning the IPCC report -- we want to use its contents," he said.

As Bonn sweltered in 31C temperatures Monday, Kate Dooley, research fellow at the Australian-German Climate & Energy College, said any outcome would not affect the Paris deal, which Saudi Arabia insists it is still committed to.

"The Paris Agreement's goal will continue to based on 'best available science' whatever happens in Bonn and the IPCC report on 1.5C will continue to exist, with all of the scientific knowledge it contains," she told AFP.