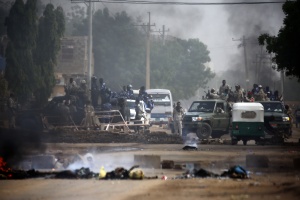 Protest leaders called on their supporters to take part in "total civil disobedience" to topple the ruling military council following the deadly dispersal Monday of a weeks-long sit-in outside the army headquarters in Khartoum.

The Transitional Military Council ousted veteran president Omar al-Bashir in April after months of protests against his authoritarian rule and had agreed a three-year transition period to a civilian administration.

But army ruler General Abdel Fattah al-Burhan said the plan had been ditched and an election would take place under "regional and international supervision".

"The military council decides on the following: cancelling what was agreed on and stopping negotiating with the Alliance for Freedom and Change, and to call for general elections within a period not exceeding nine months," Burhan said.

The Sudanese Professionals Association (SPA), which spearheaded protests against Bashir, rejected the call.

"It's not the putschist council, nor its militias, nor its leaders who decide the fate of the people, nor how it will transition to a civilian government," it said.

The SPA said Monday's action against the sit-in amounted to a "bloody massacre" and urged the global community "to isolate and stop dealing with the so-called military council".

It also called for an independent investigation into the killings under international supervision.

The Transitional Military Council said it "regrets" the events, calling it a "clean-up operation" that went wrong.

The Central Committee of Sudanese Doctors -- which is close to the protesters -- said 40 people had been killed on Monday and Tuesday, mostly at the sit in. Hundreds were wounded.

Among the dead was an eight-year-old child, it added.

An 18-year-old was also killed on Tuesday "by the bullets of the military council's militias" in the southern town of Rebek.

The Sudanese Doctors Union accused security forces of attacks on hospitals and staff across the country, and alleged some women had been raped in an area of the capital without giving details of how the group had learned of the assaults.

A bid by the UN Security Council to condemn the killing of civilians and call on the military and protesters to work together was blocked by China, who was backed by Russia, during a closed-door meeting on Tuesday.

Top US envoy David Hale, under secretary of state for political affairs, also underlined the importance of a transition to a civilian-led government in a phone call with the Saudi deputy defence minister, Khalid bin Salman, the US Department of State said.

African and Western governments have been strongly supportive of the protesters but Arab governments, led by Saudi Arabia, have backed the military rulers.

Tensions remained high across Khartoum Tuesday, with heavily armed members of the paramilitary Rapid Support Forces, thought to have been largely behind the crackdown, deployed in large numbers.

Protest leaders said the large square outside army HQ where demonstrators had camped out day and night since April 6 had been cleared.

Despite the security presence and internet outages, residents of some areas of the capital still came out to mark the Eid al-Fitr festival a day early and to protest.

In Omdurman, just across the Nile from Khartoum, a witness said by phone that the Rapid Support Forces were trying to disperse demonstrators who had put up barricades by "firing live rounds in the air".

"We gathered in our square as we usually do every year but the Rapid Support Forces and the police fired teargas and soundbombs at us and after the prayers the youth closed the main street by putting up barricades," a resident of the Bahri area told AFP.

Other streets around the city centre were almost deserted, with many markets and shops closed and almost no cars on the roads.

Flights into Khartoum were disrupted as airlines monitored developments on the ground.