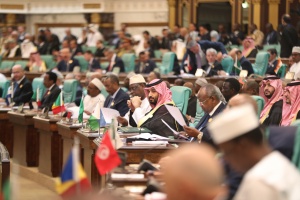 Saudi Crown Prince Mohammed bin Salman (C) attends the opening session of a summit of the 57-member Organization of Islamic Cooperation (OIC) in the Saudi holy city of Mecca in the early hours of June 1, 2019. The OIC meeting is the third and final summit hosted by Saudi Arabia this week, aimed at galvanising support among Arab and Islamic nations against arch-rival Iran, which has close ties with Turkey. (BANDAR ALDANDANI / AFP)

(AFP) - A Saudi-hosted Islamic summit on Saturday threw its support behind Palestinians ahead of a US-led peace plan suspected to be skewed in favour of Israel, as regional allies rallied around Saudi Arabia over tensions with Iran.

Gulf and Arab leaders at the Organization of Islamic Cooperation (OIC) talks, the third and final Iran-focused summit in the holy city of Mecca, denounced the controversial US move to transfer its embassy to Jerusalem and recognise Israel's sovereignty over the Golan Heights.

The summit, marked by the notable absence of Iran and Turkey's leaders, also urged OIC members to "boycott" countries that have opened diplomatic missions in the city.

Trump broke with decades of bipartisan policy to recognise Jerusalem as the capital of Israel in December 2017.

The statement comes as Trump's son-in-law Jared Kushner prepares to roll out economic aspects of his long-awaited Middle East peace plan at a conference in Bahrain later this month.

The plan, dubbed by Trump as the "deal of the century", has already been rejected by the Palestinians, who say Trump's policies have shown him to be blatantly biased in favour of Israel.

"We confirm that terrorist actions not only target the kingdom and the Gulf region, but also target the safety of navigation and world oil supplies," the king told OIC member states.

Tehran has strongly denied involvement in any of the incidents.

In a tweet just before the start of the summit, the king vowed to confront "aggressive threats and subversive activities".

In two previous back-to-back summits on Friday, Gulf and Arab allies similarly threw their support behind Saudi Arabia, which drew accusations from Iran of "sowing division".

The summits came after Trump's hawkish National Security Advisor John Bolton said Wednesday that Iranian naval mines were "almost certainly" responsible for the damage to the four ships off the United Arab Emirates on May 12.

The findings of a five-nation inquiry into what happened have yet to be released.

Tehran dismissed Bolton's accusation as "laughable" and accused him of pursuing "evil desires for chaos in the region".

Regional tensions have grown since US President Donald Trump's administration reimposed sanctions against Iran, after Washington pulled out of a multilateral 2015 nuclear accord signed with the Islamic republic.

But Trump has appeared to soften his tone towards Tehran, saying that his government does not seek "regime change".

A regional heavyweight, Turkey -- which maintains close ties with Iran -- was instead represented by its Foreign Minister Mevlut Cavusoglu.

Erdogan's visit would have been his first to the kingdom since the brutal murder last October of journalist Jamal Khashoggi in the Saudi consulate in Istanbul, which tarnished the international reputation of Crown Prince Mohammed bin Salman.