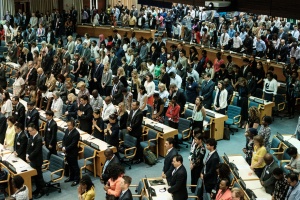 People have a moment of silence for the victims, including 19 UN workers, of Ethiopia Airline's crash before the 4th UN Environment Assembly at the UN headquaters in Nairobi, Kenya, on March 11, 2019. (Yasuyoshi CHIBA / AFP)

(AFP) - An assembly of the UN Environment Programme (UNEP) opened in Nairobi Monday under a dark cloud cast by the plane crash that killed 157 people, including 22 United Nations staff, many heading for the annual event.

Delegates arrived with the UN flag flying at half-mast, and the flags of all UN nations that usually adorn the UNEP headquarters having been taken down.

As they wondered aloud who among their colleagues may have been on board the ill-fated Boeing, delegates hugged and comforted one another, and observed a minute's silence at the meeting's start.

According to Maimunah Sharif, head of UN Habitat, at least 22 UN employees were among those who perished when the Nairobi-bound Ethiopian Airlines jet crashed early Sunday just six minutes after take-off from Addis Ababa.

"I stand before you on the first day of the UN Environment Assembly, which has officially commenced today in the wake of this tragedy," she told delegates.

"We will not forget this tragedy, nor those who perished. Let us reflect that our colleagues were willing to travel and to work far from their homes and loved ones to make the world a better place to live."

Nairobi hosts the global headquarters of UNEP, and is the regional seat for many UN agencies.

In a statement ahead of the conference, the UN said it was "deeply saddened by the news of the Ethiopian Airlines accident.

"Our thoughts and prayers are with the families of those affected. We are following developments closely," it said.

A member of the UNEP secretariat told AFP Monday it was "still trying to consolidate" the number of staffers killed.

Among the UN staff were some who worked for the World Food Programme, the UN refugee agency (UNHCR) and the International Organization for Migration, the agencies have said.