From India to Seychelles - K.D Pillay a highly respected entrepreneur to be missed by business community 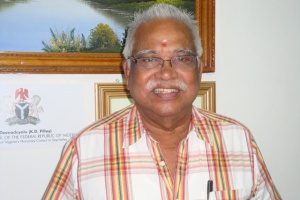 (Seychelles News Agency) - On Friday July 25, the Seychelles business community and the Hindu community in Seychelles lost and active and much loved member K.D. Pillay also known as Mr Deenu who passed away at the age of 76 after almost 60 years living on the main Seychelles island of Mahé.

Deenu is being buried at Seychelles main cemetery at Mt Fleuri on the outskirts of the Capital of Victoria today Monday July 28.

Seychelles' President James Michel has sent a message of condolences to the Pillay family following the death of K.D Pillay, according to a press statement issued by State House this afternoon.

In a letter addressed to his son, Dr Vinayagamurthy Pillay, Michel said that Deenu would be mourned and remembered as a ‘compassionate, caring and generous man.’

“Deenu, as he was affectionately known, was a gentleman of great integrity. A highly respected entrepreneur, who contributed substantially to the development of the business community in Seychelles, Deenu was also a philanthropist who has touched and enriched many lives,” said Michel.

SNA presents the life story of K.D Pillay the owner of several businesses in Seychelles as told by Gafoor Yakub.

Anyone who remembers K.D. Pillay also known as Mr Deenu, in his prime will undoubtedly never forget his gregarious laugh and his love of jokes. Most people who have met Deenu can tell you that they have always found him to be of good humour and positive mental attitude. To the late Yakub Chaka, Deenu was both his cheerful, funny friend and a businessman who ‘always kept his word’.

Born on May 9, 1938 in Tamil Nadu, South India, K.D. Pillay came from a hardworking family brought up with sound religious upbringing. He was born in a family of 4 with 1 sister and 2 other brothers. He was the third eldest among his siblings. Soon after his birth in 1938, Deenu’s father left India for Seychelles to do business. Then in 1939, the Second World War started. That made it difficult to travel safely by sea. So it was only later in 1945 that Deenu’s father was able to safely return to India to be with his family. By then Deenu was 7 years of age. He described this particular occasion as “a happiness he had so far never felt”.

Because of the unsettling war situation at the time, Deenu’s father decided to stay in India for a while and do business in Mayavaram, South India instead of returning to Seychelles. It’s only after the end of the war in 1945 that his father went back to Seychelles with his eldest son accompanied by a business colleague, Kunju, (Uncle Kunju to Deenu). The shop that Deenu’s father owned and operated was located on Hangard Street in the Seychelles capital of Victoria.

Then, in August 1947, when Deenu was preparing to celebrate India’s independence with his friends in India, he got the sad news by telegram that his father, Kalaiperumal Pillay, had passed away in Seychelles. That was a major blow to him and his family. Deenu was only 9 years old. Within a few months, their family income and wellbeing were shattered. It was thanks to a neighbour’s kindness that Deenu managed to get financial assistance and complete his secondary school studies and then went on to College. Because he was innately good at public debates, Deenu’s dream was to one day join politics and serve the general public.

However, half-way through college, at around 17 years of age, he faced some further financial difficulty. This was when he thought long and hard about how he could help his family. After consulting his mother and elder brothers, Deenu decided to leave India during the school vacation period and travel to Seychelles. In those days it took one month to travel from Bombay to Seychelles because the shipping vessel was more like a cargo ship that stopped in various ports on the eastern and southern coast of Africa before reaching Seychelles.

Once in Seychelles, Deenu went to see his father’s shop on Hangard Street. That was in 1955. A nephew of his father had let the shop out on lease and returned to India. Instead of selling his father’s shop and returning to India as was originally planned, Deenu chose to get some work experience by first working with a friend of his father, R. Naidoo, and later with his father’s business colleague, Kunju Pillay also known as RSK Pillay where he worked as a Sales Assistant in the late 1950s and early 1960s.

When interviewing Mr. Deenu recently for his life story, he was quick to remind me that in those days the supply of AC/DC electricity was not widespread. Most fridges would run on kerosene. He then burst out laughing as if to say, ‘those were the good old days’.

Deenu’s friendliness, his radiant smile and his manner of moving with the customers led RSK Pillay to realise that he showed a lot of promise and potential. So when the lease period for his father’s shop was over, Kunju or RSK Pillay encouraged him to take over and run his own shop. This he did with roaring success with the help of a relative, Krishnamurthy. The business prospered day-by-day.

Later on, around 1964, Kunju suddenly became ill at the age of 65. He wanted Deenu to take over his shop at Quincy Street in Victoria while he went for medical treatment in India, as he did not have any other person he could trust to take over his business. At first Deenu hesitated because he did not have enough funds to pay Kunju, plus he had just started to run his own father’s shop. But then uncle Kunju told Deenu that he can pay him back in instalments, and this facilitated matters greatly for him. Deenu got Khrisnamurthy to look after his father’s shop at Hangard Street while he himself managed the shop on Quincy Street, near the main Victoria market. Deenu was 26 years of age at the time.

In 1965, he renamed the RSK Pillay shop on Quincy street “Chez Deenu” because most Seychellois found it difficult to pronounce his given name of Deenadayalu Pillay and this has been the case ever since. At the time, ‘Chez Deenu’ was employing 10 workers from South India and almost 10 local Seychellois workers. While doing business, Deenu integrated well among the local Seychellois community. He participated in the Victoria District Council elections and won a seat for a five year term, serving alongside Hilda Stevenson Delhomme and other well-known personalities.

In 1968, after spending 13 years in Seychelles, Deenu returned to India where he got married in December 1968 to Soundara Valli. The happily married couple returned to Seychelles and settled down, and before long, they started a family.

Over the years, namely in the 1970s and 1980s, Deenu expanded his business and made new friends such as Merlin Parcou, Adelbert Denousse, Paul Sinon, Yakub Chaka, Umesh Dhanjee, Dolfuss Delorie, Billy, Babe and Mickey Mancham, Mickey Rene, Oglivy Berlouis and many more. Deenu entered the local business circle and often met up socially with some of his friends at the ‘Seychelles Club’ facing Gordon Square (now called Freedom Square). They used to meet on Sundays between 10am and 1pm for drinks and jovial conversation before Sunday lunch.

Deenu’s uncle, Manikkam Pillay of Grand Anse Praslin was a good friend of the Suleman Adam.  The late Suleman Adam of Adam Moosa & Company was an adviser to Deenu in his business and assisted him financially. Deenu was grateful when Adam Moosa sold one of its Market Street properties to him where he managed to construct the ‘Deevas Complex’.

In the 1990s, Deenu played a key role in the construction of the first Hindu temple in Seychelles. Today the beautifully decorated temple serves as a major tourist attraction in the centre of town. In many ways, Deenu has built bridges between India and Seychelles. He was responsible for the establishment of the Rajiv Gandhi Foundation˗Indian Ocean Chapter providing or coordinating services in the fields of education, social welfare, culture, health etc. He was an active member of the Indo-Seychelles Friendship Association. He was the Honorary Consul of Nigeria and he served as the Chairman of the Diabetic Society of Seychelles until his passing away on Friday July 25. His import, wholesale and retail business has been a member of the SCCI (Seychelles Chamber of Commerce & Industry) for a long time.

During the foreign exchange crisis of 1993-1994, Deenu decided to enter the real estate business and invest his surplus funds into property development while continuing to operate the Chez Deenu shop. He was the successful owner of at least 6 buildings consisting of a mix of offices and apartments.

Throughout his productive life, Deenu also known as K.D. Pillay was an active businessman and an affable person. Having spent close to 60 years in our islands, he has contributed much to the local Seychellois community. In May 2014, he celebrated his 76th birthday in Seychelles. He recently told me that his ultimate wish is that others should get the happiness that he has enjoyed.

It would be fair to say that Deenu was well liked and respected by many. He will be remembered fondly by all who knew him for his friendliness and his loud, ringing laughter. He leaves behind his wife, two children and four grandchildren.