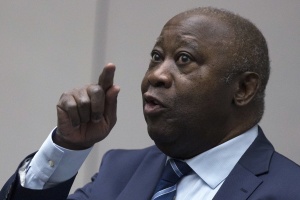 (FILES) In this file photograph taken on January 15, 2019, former Ivory Coast President Laurent Gbagbo gestures as he enters the courtroom of the International Criminal Court in The Hague, where judges were expected to issue rulings on requests by Gbagbo and ex-government minister Charles Ble Goude to have their prosecutions thrown out for lack of evidence. The International Criminal Court finally freed former Ivory Coast president Laurent Gbagbo on February 1, 2019, after his shock acquittal last month on charges of crimes against humanity. Supporters sang and waved flags in the Hague after judges agreed to release the 73-year-old on condition that he stays in an as-yet-unnamed country pending an appeal by the prosecution. (Peter Dejong / ANP / AFP)

Supporters sang and waved flags in the Hague after judges agreed to release the 73-year-old on condition that he stays in an as-yet-unnamed country pending an appeal by the prosecution.

Gbagbo, the first former head of state ever to stand trial at the ICC, and his aide Charles Ble Goude were cleared on January 15 over a wave of violence after disputed elections in the west African nation in 2010.

More than 3,000 people died on both sides after Gbagbo refused to concede defeat to his internationally backed-rival -- and now-president -- Alassane Ouattara.

ICC appeals judge Chile Eboe-Osuji said the court would release Gbagbo "to a state willing to accept them on its territory and willing to enforce the conditions set" by the court.

The court later said that Gbagbo and Ble Goude had been released from the ICC's detention centre in The Hague for an "interim" location while his final destination was confirmed, without giving further details.

"We are very happy for Mr Ble Goude and his family that he is finally released," Ble Goude's lawyer Alexander Knoops told reporters. "He was under huge stress."

One country -- whose name was redacted in court documents -- had "expressed its willingness to receive Mr Gbagbo" on condition that he signs a pledge to return to court if asked.

Prosecutors had expressed fears that if released, Gbagbo would fail to return to the court for a retrial if January's acquittal was overturned on appeal.

He also had to surrender his travel documents, report weekly, avoid contacting witnesses in Ivory Coast and refrain from making public statements about the case, the court documents said.

Lawyers have previously cited the arrangement reached with former DR Congo warlord Jean-Pierre Bemba, who went to Belgium after he was cleared by the ICC last year.

While Ivory Coast is an ICC member state, the court may be unwilling to send Gbagbo to his homeland given that it has refused to surrender Gbagbo's wife Simone despite an outstanding ICC warrant for her arrest.

Dozens of Gbagbo supporters broke out in song, waving Ivorian flags and chanting slogans like "Gbagbo is free!" and "Respect Gbagbo power!" They were watched by around 20 Dutch police officers.

"Eight years is a long time" to be in detention, Abdon Bayeto, one of Gbagbo’s closest advisors told reporters, comparing the release to that of the late Nelson Mandela, who spent 27 years behind bars in apartheid South Africa.

"Finally reconciliation can start in the Ivory Coast".

Gbagbo and Ble Goude went on trial in January 2016 accused of playing a role in murder, rape, persecution and other inhumane acts during the post-electoral violence.

Former academic Gbagbo had been in power since 2000, after two decades in opposition, but found his rival Ouattara backed by western powers and the African Union after the election result was disputed.

Gbagbo was captured in 2011 by Ouattara's troops, aided by UN and French forces, and sent to stand trial at the International Criminal Court.

They also ordered the immediate release of Gbagbo and Ble Goude but prosecutors successfully applied to have Gbagbo kept in detention, saying they may appeal.

Chief ICC prosecutor Fatou Bensouda said Friday that she was waiting to "carefully examine" January's acquittal ruling before deciding whether to challenge it.

The Gbagbo acquittal was a severe blow for ICC prosecutors after similar failures with Bemba last year and Kenyan leader Uhuru Kenyatta in 2014.

The delay in Gbagbo's release at least puts off, for now, the political uncertainty over his possible return to a country where he still faces a possible jail term for economic crimes.

His acquittal comes at a sensitive time with Ivory Coast facing fresh elections in 2020.