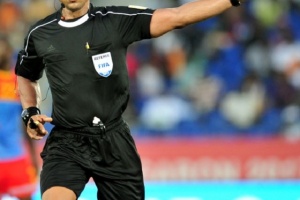 The provisional suspension on Bernard Camille and two other Seychellois referees has been lifted. (Seychelles Nation)

(Seychelles News Agency) - The disciplinary board of the Confederation of African Football (CAF) has suspended a Seychellois referee for his involvement in a case of bribery while clearing the name of another islander who was falsely accused.

Speaking to SNA on Tuesday, the Secretary-General of the Seychelles Football Federation, George Bibi, said that referee Alistair Barra has been banned for 10 years while the provisional suspension on Bernard Camille has been lifted.

“The disciplinary board of CAF met on the 13th January and determined that there was no evidence to prove that Bernard Camille and his two colleagues were engaged in bribery. So CAF decided to lift the provisional suspension on the three so they are now free to officiate at international matches,” said Bibi.

The case of bribery was reported by the Egyptian sports website Kingfut in October last year. The website stated that the football director of the Egyptian club Al Masry, Ibrahim Hassan, had revealed in a radio broadcast that Bernard Camille wanted a bribe for their game against Congolese side AS Vita. The broadcast followed the defeat of Al Masry 4-0 against AS Vita in the CAF Confederations Cup.

In a letter sent to the Seychelles Football Federation, CAF said that the name of Bernard Camille and his two colleagues were cleared. The letter also stated that the Confederation received a letter from Seychellois referee Alistair Barra explaining that he recognises his fault and confirms that he was the only one contacting the club officials.

Bibi said that “Alistair Barra was the 4th referee of the match while Bernard was the central referee for the match.  Now that he has been banned for 10 years he will not be able to officiate any international or national matches. This is because the Federation is an affiliated member of CAF we have to uphold their decisions.”

Speaking to SNA, Bernard Camille said he was happy with the verdict but he is still upset with the news reported on the Seychelles Broadcasting Corporation’s sports news.

“Although my name has been cleared I still have a problem with SBC in the way this was reported, it was as if I had been found guilty. It was really painful and it affected my mood in the festive season. They gave me a bad name and many Seychellois believed that I would resort to bribery. So for me, this is not over,” said Camille.

SNA contacted SBC and a spokesperson said the Corporation is not going to comment at this point.

As for the Federation, Bibi said, “We are comforted to know that the three referees have been cleared and we are also comforted that this was a case of mistaken identity as we stated from the beginning."