Central Bank of Seychelles wants residents to pay taxes electronically, not by cash and check 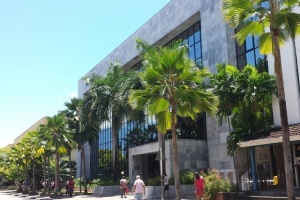 (Seychelles News Agency) - The Central Bank of Seychelles (CBS)  wants to minimize the use of cash and checks for payment of taxes and instead is encouraging the use of electronic transfers from both the government and the public, a bank official said Friday.

In a press conference held on Friday, Liz Julienne, the Director of Financial Inclusion and Market Conduct Division at the Central Bank, said that the bulk of transactions made to the government are effected through the issuing of checks, such as when businessmen pay their taxes.

“Over the years we have found that there are a lot of bounced checks when it comes to payment of taxes and revenue is not coming in on time in the government's account,” said Julienne.

The director added that the number of bounced checks are rising, a situation described as alarming for the Central Bank of Seychelles as the government relies on taxes to implement projects.

A set of studies carried out by the bank in 2016 found limited infrastructure for electronic payment facilities. The studies also found a need to enhance trust in consumer protection and legal framework when making use of innovative payment facilities.

The Cabinet of Ministers approved these recommendations made to improve the payments environment, especially the progression to electronic payments, late last year.

During the press conference on Friday, the Senior Financial Surveillance Analyst of the Financial Surveillance Division, Samantha Esparon, explained that such a framework will help the bank to “put in place certain tools that central bank, as regulator, needs to be able to deal with an event should a bank fail.”

“In Seychelles we have had certain banks that have failed - the Commercial Bank of Seychelles in 1979 and the BCCI in 1991. We also had a case where the Central Bank had to intervene and take control of the bank which was BMI,” said Esparon.

She added that such experiences have taught central bank that “we need this framework in place to be able to resolve a bank that would fail.”

The Central Bank has taken into consideration that over time, the financial system globally and in Seychelles – a group of 115 islands in western Indian Ocean - has changed and the products offered by banks as well as the different technologies being used have made it so that banks have become bigger and more complex.

“We have considered international best practices when coming up with this project, however, we found the need to customise it to the Seychelles' environment. Our banks are doing traditional banking but there are potential for them to grow into other business avenues,” said Esparon.

She explained that it is important that, should a bank be in a deteriorating state, the central bank will have the power to take control of the bank and manage its assets. This will allow for the transition to be done in a manner that will not affect the public or the banking sector in general.