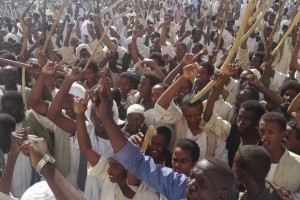 Crowds of supporters of the Sudanese President wave sticks as they gather in Sudan's easten city of Kassala on January 7, 2019. It was the first such rally backing Sudanese President Omar al-Bashir since protests against his regime erupted across several cities including the capital Khrtoum last month. (AFP)

(AFP) - Hundreds of people gathered in Sudan's capital Wednesday in a show of support for President Omar al-Bashir's embattled regime, as riot police fired tear gas at protesters at a rival anti-government demonstration.

Hundreds of riot policemen, soldiers and security agents, some carrying machine guns, were deployed around the site of the pro-Bashir rally in the capital's Green Yard, a large open ground in the city, an AFP correspondent reported.

Men, women and children carrying banners supporting Bashir arrived in buses from early in the morning.

The rally was the first held in Khartoum in support of Bashir since protests erupted.

"This gathering sends a message to those who think that Sudan will become like other countries that have been destroyed," Bashir told a cheering crowd.

"We will stop anyone who destroys our properties."

In the initial protests that erupted on December 19 in towns and villages before spreading to Khartoum, several buildings of Bashir's ruling National Congress Party were torched.

Angry demonstrators have taken to the streets after a government decision to triple the price of bread at a time when the country has been hit by an acute shortage of foreign currency and inflation of 70 percent.

Analysts have described the protests as the biggest threat yet to Bashir's regime.

Authorities say at least 19 people including two security personnel have been killed during the demonstrations, but human rights group Human Rights Watch has put the death toll at 40 that included children.

Crowds chanting "Allahu Akbar" (God is greatest) and "Yes, Yes Bashir we will follow you" welcomed the president at the rally accompanied by his wife and a group of ministers.

As soon as Bashir arrived, mobile phone networks and the internet were shut down in and around the rally site.

"Those who tried to destroy Sudan ...put conditions on us to solve our problems, but our dignity is more than the price of dollars," Bashir said in an apparent dig at Washington that had imposed a trade embargo on Khartoum in 1997. The embargo was lifted in October 2017.

Dressed in a khaki shirt and trousers and waving his trademark cane, a smiling Bashir greeted the cheering crowd as men and women whistled and waved flags.

Bashir, who has ordered the police to use "less force" on demonstrators, has blamed the violence during protests on conspirators without naming them.

"Those who conspired against us and planted traitors amongst us are those who carried out arson attacks and caused damage," he told a group of soldiers on Tuesday at an army base in the town of Atbara where the first protest erupted last month.

"Some people are saying that the army is taking power," Bashir said, slamming some political groups who previously were with the government but have now called for his resignation.

"I have no problem with that, because the army always guards the security of our homeland," he said without offering further details.

Soon after the pro-Bashir rally ended, groups of protesters took to the street in Omdurman, the twin city of Khartoum, for a yet another anti-government demonstration.

About 300 protesters chanting "Freedom, Peace and Justice" blocked a key road in Omdurman, but were quickly confronted with tear gas as riot police moved in to disperse them.

More than 800 protesters have been arrested since the unrest began, officials say, insisting that the situation has now stabilised even as protests rumble on.

Opposition leaders, activists and journalists have been detained as part of a crackdown to prevent protests spreading.

Britain, Canada, Norway and the United States reiterated their concern over the situation in Sudan in a joint statement issued Tuesday.

"We urge the government of Sudan to ensure that a fully transparent and independent investigation into the deaths of protesters takes place as soon as possible, and that those responsible are held to account," the statement said.

It also called on Khartoum to release all those detained without charge, warning that the government's action in the issue "will have an impact" on engagements with the governments of the four countries.