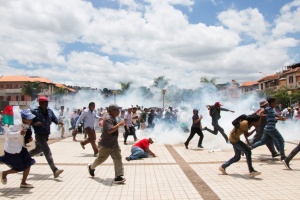 Supporters of Madagascan presidential candidate Marc Ravalomanana scramble as security forces fire tear gas during a demonstration to protest election results on January 2, 2019, in Antananarivo. Madagascan security forces fired tear gas on January 2 to break up a protest by supporters of losing presidential candidate Marc Ravalomanana, who claims he was denied victory in last month's election because of fraud. In the run-off vote on December 19, Ravalomanana won 44 percent against the winner Andry Rajoelina on 55 percent, according to official results. Thousands of Ravalomanana's supporters gathered in the centre of the capital Antananarivo but were quickly dispersed by police using tear gas, according to an AFP reporter at the scene. (Mamyrael / AFP)

(AFP) - Madagascar police fired teargas Saturday to disperse some 500 supporters of the losing candidate in last month's presidential election, in the fifth such protest this week, AFP correspondents witnessed.

Defying a ban on demonstrations, hundreds of supporters of Marc Ravalomanana took to the streets of the capital Antananarivo to rally on the square outside City Hall, with police firing tear gas to disperse them.

After a brief game of cat-and-mouse with police chasing demonstrators, the heavens opened and a torrential downpour quickly clearing the area.

Police had also used tear gas at a similar demonstration on Wednesday.

Defeated, Ravalomanana -- also a former president -- cried foul, claiming fraud and demanding a recount of votes in the Indian Ocean island state, which has a long and bitter history of instability.

He has lodged an appeal to the Constitutional Court, which is due to hand down its ruling on January 8, and his supporters have vowed to keep up their protests until then.

"It's not fair that they have dispersed us with tear gas, we are just ordinary citizens who want to know the truth about what happened at the ballot box," said 53-year-old protester Jean-Paul Rasolon.

"After January 8, if they don't establish the truth, and it doesn't matter who wins, we will be in a crisis," he warned.

In the December 19 runoff, Rajoelina, who was previously in office from 2009-2014, won nearly 56 percent of the votes while Ravalomanana, who served as president between 2002-2009, took just over 44 percent.

Both men were banned from running in the election of 2013 as part of an agreement to end the recurring crises that have rocked Madagascar since independence from France in 1960.