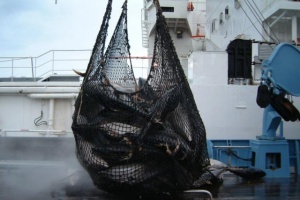 File photo: Yellowfin tuna is of local importance as the Seychelles is a major tuna transhipment port in the Indian Ocean. (Seychelles Fishing Authority)

(Seychelles News Agency) - Seychelles has welcomed over 80 scientists from more than 30 countries taking part in a meeting of the Indian Ocean Tuna Commission (IOTC) at Eden Bleu on the outskirts of the capital Victoria from December 3-7.

Scientists from member countries of the IOTC met throughout the year in a series of meetings which culminated in the Scientific Committee meeting taking place in Seychelles, an archipelago in the western Indian Ocean.

According to the IOTC’s Science Manager, Paul de Bruyn, this year’s meeting “is of extreme importance as scientists will pay particular attention to several burning topics, such as the population status of the flagship yellowfin tuna species bycatch species, such as sharks and sea turtles, as well as the impacts of fisheries on the ecosystem.”

The yellowfin tuna has received considerable attention recently after the IOTC reduced the species catch by 15 percent in 2017. This measure was taken as the Commission acknowledged that recent catches for this species have been higher than the estimated maximum sustainable yield for the Indian Ocean population.

In the meeting, scientists will discuss how best to provide updated management advice to the IOTC Commission.

Yellowfin tuna is of local importance as the Seychelles is a major tuna transhipment port in the Indian Ocean. Fisheries is the second top contributor to the island nation’s economy with the processing and export of tuna products providing a significant proportion of its annual export revenue.

Aside from the yellowfin tuna, scientists are investigating the effects of fishing on non-target species, such as sharks, marine turtles, seabirds, dolphins and whales. The IOTC has recognized its responsibility to take into account these often-vulnerable species in their management policies.

“There is often a lack of data for these non-target species, which makes it extremely difficult to assess the impacts that fishing has on their populations,” said Fabio Fiorellato, the data coordinator at the IOTC Secretariat.”

Fiorellato added that the Secretariat, which is based in Seychelles, is helping member countries to address data gaps, by providing support to capacity building activities and encouraging collaboration.

Another topic being investigated is the role of fisheries in the pelagic ecosystem. Long-term ecosystem-based fisheries management is being discussed.

“It is being increasingly emphasized that fisheries do not operate in isolation, but within an intricate ecosystem that is still poorly understood. It is crucial that the effects of fisheries on the ecosystems in which they operate are taken into consideration when providing management advice” said Sarah Martin, a fisheries officer at the IOTC.

The Indian Ocean Tuna Commission (IOTC) is an intergovernmental organisation responsible for the management of tuna and tuna-like species in the Indian Ocean. Based in Seychelles, the commission is a body formed under the Food and Agricultural Organisation (FAO) of the United Nations and has 31-member countries.