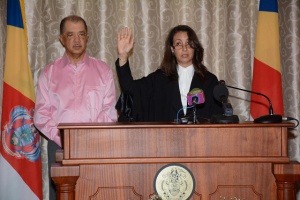 Seychellois Mathilda Twomey being sworn in as the Chief Justice of the Supreme Court of Seychelles today in the presence of the country's president, James Michel (Joena Bonnelame, Seychelles News Agency)

(Seychelles News Agency) - Mathilda Twomey is the first Seychellois woman to hold the position of Chief Justice of the Supreme Court of Seychelles.

She was sworn in this morning at State House in the presence of James Michel, President of Seychelles, fellow judges and members of her family.

The new Chief Justice said she understood what was expected of her and added that she wished to implement a series of measures to speed up procedures for cases that have been presented to the Supreme Court.

Despite an increase in the number of judges at the Supreme Court of Seychelles, cases can still take several years to be processed.

Twomey believes, however, that cases should ideally be processed and completed within a year.

Chief Justice Twomey also expressed surprise to see that social media was being utilised to express the reactions for various judgments made by the Supreme Court of Seychelles.

"There is always a loser and a winner in all cases presented. It's very easy for a loser... to say that justice is only based according to the government or a political party," she stated to the press.

"I am proud to say that the judgments of the court are reviewed abroad by other judges and that so far no one has pointed out that we had a political agenda in judgment, especially for the judgments of the Court of Appeal... I am personally not interested in politics, I am not supportive of any side, I am impartial," said Twomey.

Twomey was appointed a judge of Court of Appeal in March 2011, and will now combine the two roles.

According to a press statement issued on Tuesday by the Office of the President, Twomey said she was in a "unique position" in which she intended to spearhead the constitutional and structural reforms to bring Seychelles' judicial system "into the 21st century", adding that she intended to serve both courts with "equal energy and fervour".

Speaking to local media after the swearing-in ceremony, Justice Twomey stressed that the Judiciary should refrain from engaging in political arguments and that its officers should deliver according to their official oaths of office.

She explained that she would take the most complex cases, particularly those regarding the constitutional court.

She was also teaching at the National University of Ireland in Galway, but in order to occupy her new full time position she will need to discontinue her teaching.

The President of the Court of Appeal of Seychelles, Judge Francis MacGregor, who was Mathilda Twomey’s mentor, stated that he was always proud to see those who worked hard succeed.

"What we sow is what we reap," said MacGregor.

"Judge Twomey is a highly qualified jurist with a wealth of experience and knowledge, which, undoubtedly, will be a great advantage for the reforms needing to take place and for the legal and judicial system in our country," declared President James Michel in a statement announcing the appointment of the Chief Justice of the Supreme Court of Seychelles.

Twomey will replace the former Chief Justice, Fredrick Egonda-Ntende, a Ugandan National who left the country in August 2014 after spending five years in the position.