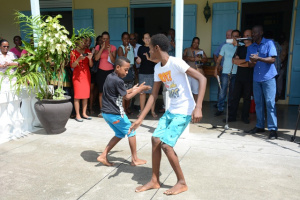 Tinge is a playful combat dance where two persons try to outshine each other by stomping on the other person’s foot. (Archive photo: Joena Bonnelame, Seychelles News Agency)

(Seychelles News Agency) - Seychelles is currently carrying out research to learn more about one dance form that is part of the island nation's intangible cultural heritage - tinge - as part of a larger project being undertaken in the Indian Ocean region.

The tinge of Seychelles, which is performed by men, is believed to have the same same African roots as the moringue of Reunion Island as well as the capoeira of Brazil, where a mixture of combat and dance are combined.

Tinge involves two persons who dance facing each other and try to see who will outshine the other by stomping on the other person’s foot. This is done while other participants clap and sing.

With tinge being threatened with disappearance, this presents a major challenge for Seychelles in its endeavour to preserve this heritage. So far, Seychelles has been able to identify only one person, Gaetan Landry, who is able to teach the dance.

The research project aims at promoting the traditional combat art, known under different names of Seychelles, Reunion, Mozambique, Madagascar, Mayotte, and Comoros. The two-year project, expected to end in December 2023, is being co-financed by the European Union.

Earlier this year, a seminar was organised in Reunion – an overseas department of France – where representatives from the different countries met to promote the recognition of the traditional combat art form.

The international cooperation advisor for culture at the National Institute of Culture in Seychelles, Miera Savy, told SNA that will there Seychelles shared some particularities of tinge with the aim of identifying its origin.

"We still need to carry out a lot of research to learn about the origin of the people who brought the dance to Seychelles and now we highly think that they were from Mayotte," she continued.

With the regional project being organised around several strategic approaches - namely participatory, professional, artistic, historical, and anthropological - Seychelles is currently undertaking some research,
especially among the older generation on Silhouette Island, in the form of interviews.

Seychelles is also asked to carry out cartography and an inventory of tinge, to gather the maximum possible resources. At the professional level, all regions have a responsibility to raise awareness about this part of their tradition.

Seychelles is expected to also to organise meetings, create a space for exchanges relating to tinge and write a charter for the recognition of combat arts and provide training so as to preserve this heritage.

The island nation is in favour of providing lessons to the younger generation to be able to, later on, organise official competitions.