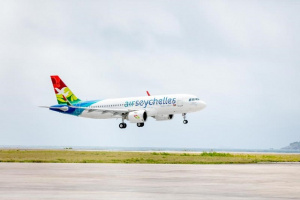 (Seychelles News Agency) - Seychelles on Thursday announced it had reached a deal to take full ownership of its national airline, Air Seychelles, following talks with Etihad Airways in which the UAE-based airline agreed to relinquish the 40-percent stake it holds at a steep discount, officials said.

The Secretary of State in the Ministry of Finance, Patrick Payet, told reporters that Seychelles received a 79 percent discount on the total liability that Air Seychelles owes Etihad.

Air Seychelles had owed $72.3 million to Etihad; with the 79 percent write-down, Seychelles will pay $11.34 million. A total of $71.5 million is still owed to bondholders.

"We are going to pay only 21 percent and this liability has been taken over by the government. Repayment will start from 2022 onwards. The second negotiation that we have is with the bondholders, where we are proposing to them to pay only $20 million," said Payet.

Payet added that Seychelles is still holding discussions with the Trade Development Bank - a bank in Africa - for a loan to be taken by the government to pay the bondholders and Etihad. Once negotiations are completed with the bondholders, details are expected to be relayed to the media.

"All of these liabilities will be in the government's books so Air Seychelles will have a clean sheet from the liability that they have," said Payet.

Etihad Airways entered a partnership with Air Seychelles in 2012, when it bought a 40 percent share in the national airline. The remaining 60 percent belonged to the government of Seychelles – a 115-islands in the western Indian Ocean.

Under the original deal, the funds provided by bondholders would be split between the United Arab Emirates (UAE) carrier and partner airlines. Each company assumed the responsibility to pay off its debt before the bond reached its due date in 2021.

Officials also announced Thursday that a new board has been set up for Air Seychelles to be headed by Nane Nanty as the chairperson with Alan Mason as its co-chairman.

The director of policy and strategy at the transport ministry, Magalie Essack, said that "in this phase of negotiations with Etihad Airways, there is a transitional agreement that has been signed in regards to the chief executive (CEO) and the chief financial officer (CFO)."

"It states that the mandate of the CEO and the CFO employed by Etihad Airways will end on June 30, 2021. With The appointment of the new board, members are expected to undertake an exercise to relook at how a new CEO and CFO will be appointed," said Essack.

The board will also be relooking at the operations of the airline as a whole and make recommendations to the government.